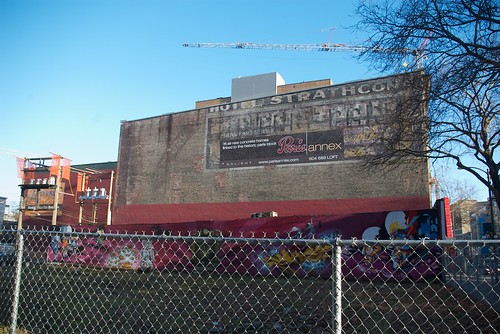 This week the City released its three-year plan for addressing housing affordability in Vancouver. The plan has been received with wide appeal as an ambitious attempt to solve street homeless in Vancouver by 2015. In fact, the plan calls for drastic reductions in the city’s own housing goals, while introducing major reporting fabrications that give the appearance of a new direction for housing.

The three-year action plan announces 3,650 new units of non-market housing. Immediately, observers will recognize that almost half of these 3,650 new units are not new at all: they are part of the 14 sites, which were promised for completion by 2010 at the latest, not 2014. The Memorandum of Understanding (MOU) for these sites was signed in 2007 and construction was supposed to start in 2008. The units were part of the 3,200 units promised by all three levels of government under the Inner City Inclusivity agreement (ICI) as a condition of hosting the Olympic Games. Zero of these units were built by time of the Olympics.

Once the 14 sites are subtracted from the 3-year total, the City is committed to building only 1,950 new housing units. However, a further significant portion of these 1,950 units are also falsely included. 319 of them are not planned for actual construction, since, as the report says, they “currently have no identified funding source.” In addition to this, 276 further units cannot be genuinely counted since they are drawn from the Little Mountain housing development. Little Mountain does not represent new units for the housing stock, since the 224 units of public housing at Little Mountain, built in 1954, were destroyed and all residents were promised to be re-housed by 2010. Since that illegal demolition, residents have been told that only half of them will be re-housed by 2014 at the earliest.

What is left, then, is approximately 1,150 new units – less than a third of the promised “new” units under the proposed 3 years plan. Fortunately, the City’s new Capital Plan for 2012-2014 allots $42.4M in land and capital grants for these 1,150 new units of non-market rental housing. But yet, again, the plan is misleading. The report acknowledges that the City cannot in fact promise the actual housing, and that “the delivery of these units will require funding from senior governments, non-profit partners and possibly the private sector.”

The public housing freeze of the past decade – a period in which homelessness has exploded to a level incomparable in the history of British Columbia – is now being re-positioned to give the impression of new government initiative. The City and Province have recognized that the main benefit of postponing the construction of affordable housing is the ability to make recurring housing announcements of “upcoming” projects. The delays at the very heart of the housing freeze are now being used to give the impression of a new plan. Thus, the three-year plan accompanies a well-designed and more PR-savvy ten-year plan, in order to defer real housing strategies into the future and lock us into the eternal present of evictions, displacement and gentrification.

A real housing plan would keep up with the City’s own existing Housing Plan and Homeless Action Plan, both of which call for the construction of 800 units of social housing per year – not 1,150 over three years. Instead of implementing those existing plans, this week’s announcement simply lowers the goals in order to conceal three years of housing inaction. The Housing Plan has been broken every year without exception under the governing Vision/BC Liberal coalition.