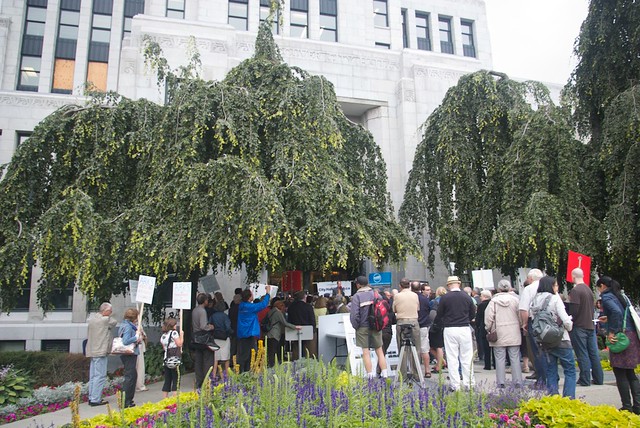 This week, City Council approved a massive rezoning request by developer Wall Financial Corporation for Shannon Mews in Kerrisdale. Kerrisdale is but one of many neighbourhoods forced to mobilize against unwanted development over the past two years. Before last Tuesday’s meeting a protest was held outside City Hall, organized by a group of activists from City Hall Watch and Neighbourhoods for a Sustainable Vancouver under the banner: “The Rezoning Process is Broken — Let’s start Fixing it.” Over a hundred people took part outside and eventually filled the council chambers. Many residents of other neighbourhoods joined the Shannon Mews community in solidarity, having faced similar rezonings in the recent past. Others still will be facing unwanted developments in their neighbourhoods later this year.

The July 26th, 27th, and 28th public hearings act as good examples of Vision Vancouver’s planning and consultation regime. There were two significant rezonings taking place. The first regarded a series of three high rises directly across from the Olympic Village. The developer was asking for an increase in density of 50% and a dramatic increase in height above the existing zoning. Over a dozen speakers spoke against the proposal. Most were concerned about the impact of the development on the affordability of the surrounding area, as high towers creep up False Creek into Mount Pleasant. These concerns were left almost completely unaddressed by City Council, and the rezoning was passed with only Councillor Ellen Woodsworth voting against.

The Shannon Mews rezoning also passed, by a vote of six to four, with the two COPE councillors, the lone NPA councillor and Vision Vancouver councillor George Chow voting against. Chow’s dissent comes as he, unlike other Vision Vancouver councillors, faces the threat of actual opposition in the upcoming election (Vision has no serious opposition, given that COPE has doomed itself to minority status and that the NPA will be without a single incumbent councillor candidate). Chow has decided to leave Vision and try his luck with the  provincial NDP.

The proposed Shannon Mews development sits on a four hectare site on the north-west corner of Granville at West 57th avenue. The site has a rich history, with some of the structures built in 1911 and others designed by Arthur Erickson in the 1970s. Currently, there are 164 housing units on the site, all rental. After redevelopment, the number of units will increase to 706 units (down from an initially proposed 891), with only a quarter of them rental.

In order to “earn” this increased density, the developer included some heritage preservation elements and rental housing commitments in the redevelopment plan. The developer used the City’s Heritage Revitalization Initiatives and Community Amenities Contributions programs to increase the number of condos allowed on the site, thereby increasing the value of the land several-fold. Let us look at how this process works.

The corrupt core of civic politics

The number of allowable units increased almost four-fold from 200 to over 700. Assuming the average unit goes for $1M (a reasonable approximation for this posh neighbourhood) the value of potential condo sales increased from about $200M to over $700M. At a 15% profit expectation, the value of profits for Wall Financial Corp increases from $30M to over $100M! By “playing the system” in this manner, the developer increases its profits well above the already excessive market quotas. This “game” constitutes the corrupt core of civic politics. Indeed, Wall Financial Corp donated over $11,500 to Vision Vancouver before the election of 2008, and another $10,000 after the election. To the consternation of Shannon Mews organizers, Wall Financial and the City held a joint press conference last week in order to defend their agreement against the “misconceptions” of concerned citizens.

The City Planning Department does “tax” profits accrued on account of rezoning, but the “tax” comes in various forms of in kind developer “contributions,” whose values are difficult to quantify: affordable/rental housing commitments, heritage preservation commitments, and public art provisions (more rarely, cash contributions are paid). In the Shannon Mews case, the City negotiated that these “contributions” add up to an approximate value of $20M, composed of: 200 unaffordable rental units; preservation of a mansion, its coach house, three trees, and a wall; some public art to be determined; and perhaps some cash. Director of Panning Brent Toderian claims that these items are valued at $20M, and that this constitutes a 75% levy on the property value increase accrued on account of the rezoning – a tall claim, given that the rezoning surely increased Wall’s profits by an amount several times this figure of $20M.

Super-developers and the concentration of capital

A common concern voiced at the Shannon Mews public hearings is that the form and scale of development don’t fit the neighbourhood. Large developers, such as the Wall Financial Corporation, can afford to build more profitable, bigger developments. The Shannon Mews development requires significant investment capital. In Vancouver, this capital is increasingly concentrated amongst fewer large firms who can “play the game” of municipal real-estate politics. Developers with a large market capitalization outpace the smaller developers who build smaller developments. While many in Vancouver are struggling to pay rent, and are faced with the impossibility of home ownership, Wall Financial Corp made $58 million in profit last year. Bruno Wall, the company’s current president, told council on Thursday that the standard expected profit for any development he takes on is 15% of his costs (surely an underestimate).

Meanwhile, Vision Vancouver has been aggressively implementing the NPA’s EcoDensity policy, and has taken a counter-productive free-market approach to the housing crisis. Listening to councillors and developers speak in Council, the logic is that increasing the supply of housing, regardless of its affordability, will lower prices for everyone. This goes against conventional land economics. Firstly, real-estate prices are sticky, and rarely do prices decrease through an increase in supply. Instead, owners hold on to properties but let them sit empty, reaping in the increases in value. Secondly, almost all of the new housing is marketed to a very high-income buyers. It is rare to see a condominium advertised as anything but “luxury”. While significant drops in city-wide real-estate values do happen, they are rare and most often take the form of sudden crashes. In the past, governments have increased affordability through subsidization and the publicly funded construction, as market solutions don’t work. The past three years of Vancouver’s real-estate market and supply-side attempts to address affordability are evidence of this, as rents and property taxes have steadily increased.

This combination of superprofits for developers and a pro-density pro-market City Council has resulted in a glut of Le Corbusier-esque monolith developments that spur community resistance. Towers are proposed, approved or have been built in the neighbourhoods of Norquay, Mount Pleasant, the Downtown Eastside, along Cambie Street and Marine Drive, among others. Instead of spreading out the density throughout these neighbourhoods, it is being concentrated in large towers. Developers favour this strategy, whereas communities do not.

The “public consultation” system is broken

Citizens from the area around Shannon Mews were clearly frustrated by the development approval process. The “public hearing” process in particular seemed a case of “going through the motions.” Even worse, this process was subverted: instead of listening and acting on public concerns, this false ‘democratic’ process was used to justify a pre-determined outcome negotiated between planning staff and developers.

This unmeaningful consultation is becoming the order-of-the-day at City Hall, and not only in the case of rezonings. Many will remember that the by-law limiting the right to protest also passed despite unanimous opposition, including from the BC Civil Liberties Association and the Vancouver Public Space Network.

What can be done when the City ignores its citizens? When the official consultation process becomes limiting instead of empowering, other forums need to be created. To truly be heard and have an effect, one needs to be outside the concrete walls of City Hall. Addressing problems in visible, public ways can shift public debate in a ways speaking at City Hall can’t.

Vancouver has a rich history of political engagement outside our government’s restrictive consultation procedures. Very often, the most effective tactics have been direct action and taking-up-space. To provide but a few examples, it was a movement outside of City Hall that prevented the demolition of Strathcona to build a freeway. Desperately-needed social housing was attained following a significant shortage in World War II (similar to that faced now) by  the occupation of the Hotel Vancouver.

Another memorable example of citizens taking direct action was All Season’s Park. In 1971, real-estate developers threatened to develop the entrance of Stanley park, just to the Northeast of Georgia at Denman. Just as today, developers had a stranglehold on municipal government. Their plan was to use City Council to open up the incredibly profitable land at Denman and Georgia to development. But people built a tent city on the park to prevent much of it from being developed. This was a time when Vancouver also faced a new “young and lively” pro-developer, centrist third major party.

A more recent example is Woodsquat, where Downtown Eastside residents and allies occupied and camped at the site to demand social and affordable housing. This action transformed the trajectory of the development more than any “delegation” to council could – more evidence of the effectiveness of bringing the struggle out-into-the-open, making it visible and public. The Woodward’s action drew attention not only to the housing crisis and all its friends (displacement, renoviction, unaffordability, gentrification, speculation), but announced that these forces will be identified and fought in the future at every turn.