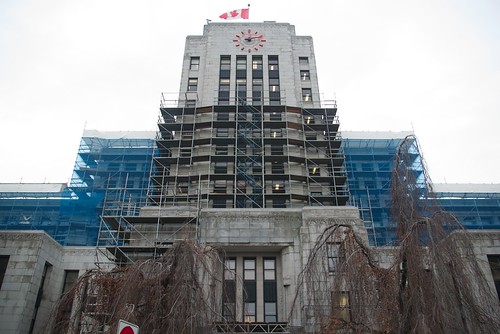 The just updated Vancouver Council Votes web site covers 39 of the most contentious issues to come before City Council 2009-2011.

Most of the contention surrounds “planning” — aka spewing out turgid bureaucratic justifications for handing over as much as possible as fast as possible to the local real estate speculation industry. What else is a poor city to do when so much of its economic base has slunk off to elsewhere?

George Chow on 24 September 2009 opposed the form of development slated for 1450 McRae Avenue. No coincidence — Chow has strong connections to Shaughnessy. (When the earlier main vote took place on 1 April 2008, Chow with Deal joined NPA’s Capri in opposing the sizeable McRae development at the edge of that special region.) Four sessions of previous public hearing saw 53 persons speak in opposition and 7 in support. On the correspondence side, 4 letters supported and 427 opposed. Amusing side note: one of the speakers in opposition back then, Tony Tang, is now the 2011 Vision replacement for George Chow.

Andrea Reimer on 18 May 2010 opposed the rezoning of 2250 Commercial Drive (Van East Cinema). Reimer lives to the south of that location. The developer proposal involved outrageous fudging, perhaps too much for Reimer to stomach. Chase the details on that 2250 Commercial rezoning if you need a purgative.

Raymond Louie on 19 April 2011 opposed bylaw amendment regarding Structures on Streets for Political Expression. In this vote he joined all of his party’s opposition, both NPA and COPE, but left a safe 7 to 4 margin for passage. Just before the vote on the bylaw amendment motion, Louie proposed an amendment. The effect of his amendment was to prohibit any Falun Gong protest structure ever at the Vancouver Chinese consulate. Kerry Jang supported the failed Louie amendment, but then voted for the bylaw. But Louie would not let go. The readiest conclusion? That certain councillors did their utmost to enable a certain foreign government — one dubiously “consulted” as the bylaw amendments were being formulated — to reduce or eliminate the nearby ongoing human rights protest of Falun Gong. Other opposers had quite different concerns.

Geoff Meggs on 31 May 2011 opposed looking at “further options” to find heritage mechanisms that might retain the large old tulip tree at 1245 Harwood Street. His lone companion on that vote was Suzanne Anton of the NPA. Best guess: Meggs and Anton wanted to help that developer get going right away on the deal already put together for an 18 storey tower.

The larger corollary: Vision squats in the middle while their outliers to left and right, COPE and NPA, vote together. Strange bedfellows!

[Endnote: On 17 December 2009 Louie and Reimer voted against a two-year pilot approval of mixed martial arts. This is not covered above because not related to planning, and because not contended by speakers (12 of 13 in support). Anton and five other Vision councillors approved the motion.]