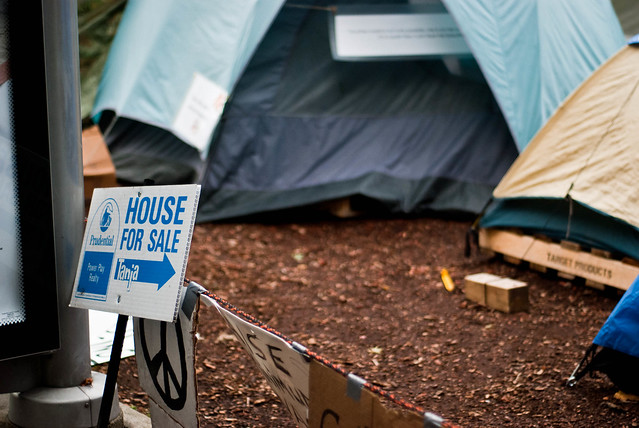 Today the mayor announced that the city will be ending the occupation of the Vancouver Art Gallery. The announcement comes as a surprise for some who have been following the local elections campaign. So far the only candidates calling for eviction at the VAG have been from the right-wing NPA. In reality the mayor and council have used forced to shut down tent cities ever since being elected in 2008.

In the three years since 2008, Vision Vancouver and Robertson have evicted all major tent cities and arrested dozens of housing activists at shelters and empty housing projects across the city. Maybe the question today is not why the Mayor has announced the closure of the occupation, but rather why it has been allowed to stay as long as it has?

After setting up on October 15, the mayor stated twice in separate sessions at city council that he would not order the removal of the camp at the VAG. So what has changed?

It pays to listen to the evolving media representations of Occupy. In the weeks after the first Canadian tent was set up, the occupations North of the 49th parallel were deemed harmless to the Canadian elite, framed as symbolic reenactments of Occupy Wall Street rather than local interventions. In the wake of Harper’s claim that “we didn’t bail out our banking sector,” news outlets across Canada repeated that the Canadian occupations could not last for long since they were not rooted in local issues. This was also the sentiment in Vancouver, where the Mayor judged that the occupation was a symbolic protest that would disappear as the winter weather arrived.

Despite feeling safe from imminent eviction, we campers still worried about the ‘NO CAMPING’ by-law signs posted about the Art Gallery grounds, which referenced the city’s unconstitutional structures by-law. In response, Mainlander writers posted an article about whether or not the by-law would be used to shut down the occupation, anticipating the worst (“for the police and city managers of Vancouver, every protest is legal up to a point — in so far as the status quo does not change”).

This turning point was October 22, after the first big march of 1,000 people on the banks.

Organizers of the march insisted on airing issues specific to Vancouver, and local questions facing #occupyvancouver, including West Coast real-estate monopolies, colonization, and host of Vancouver-specific issues. The march started by putting emphasis on the Canadian bank bailout of 2008. Vancouver is the city the Bank of Canada terms “ground zero” of the Canadian housing bubble. The 2008 bailout — a $125b purchase of toxic mortgage papers — propped up Vancouver’s housing affordability crisis, and those local windfall profits have been used to fund Vision Vancouver, our local government.

Since being elected, Vision has launched an attack on the urban poor, cutting away inclusionary zoning legislation while pushing through planning policies that maximize bank and developer profits by funneling condo development into low-income neighborhoods with a high stock of affordable housing, coupling displacement with high margins of profit for new development. Marchers on October 22 placed blame for the local housing crisis squarely on the Vision-developer-banking monopoly, arguing for a revolution against Vancouver’s monopoly-development political system. The event marked the first time occupiers drew their actions close to home, asking a directly political question: how are the 1% currently reproducing themselves in Vancouver?

The following day, the mayor’s support for the occupation faltered. He was “alarmed” by the march on the banks, stating that now “there will be very little margin for error if there are violations, then certainly the city will intervene. At this point, it’s peaceful but treading on a thin line.”

Today, November 6th, marks the day that Gregor’s “little margin” was crossed. Sadly, the pretext from City Hall for closing the camp was the tragic overdose death of a young woman living at occupy. In Vancouver there is an overdose death every third day (a staggering rate that was even higher prior to the opening of Insite). Indeed, as one occupier has stated, the tent city is a “microcosm of Vancouver…attracting all the same issues the city has.”

The Mayor is arguing that despite crushing our space, the protest can continue without the encampment. But yet occupy is a place for people without homes. For Gregor, the protest has been “undermined by a tent camp” — for us, the tent camp undermines the policies of the mayor and city council.

Yesterday the General Assembly of Occupy Vancouver passed its housing demands, showing that the occupation of the Art Gallery is both a sanctuary for Vancouver’s homeless population, and also a continuation of the years-long struggle against our local government and Mayor. That is why he has ordered us to leave. It is also why we will stay.