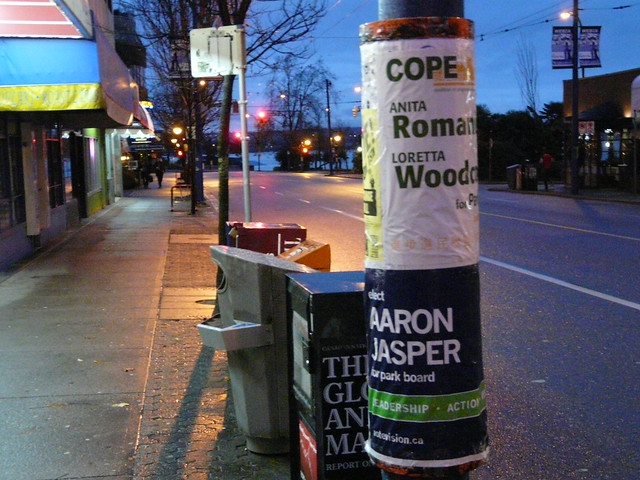 Vision Vancouver dominated yesterday’s Vancouver civic election. They elected each of their candidates for City Council, Parks Board, and School Board. The right-wing NPA only increased their council seat count from one to two, despite almost doubling their campaign spending to about $2.5 million. The Coalition of Progressive Electors (COPE) are in an even tighter spot, clearly not benefiting from their electoral agreement with Vision. Like last time, COPE’s Ellen Woodsworth was fighting for the tenth and last council spot (some news reports originally stated that the advanced polls were yet to be counted, but Frances Bula later confirmed that the 18,000 votes were included in the poll-by-poll website).

The take-home message is that, three years after 2008, the electoral scene remains largely unchanged, only with COPE faring somewhat more poorly. How do we make sense of this? How did it happen — or how did change not happen?

1. A big lesson from the past month is that you need a mayoral candidate and a strong slate in order to be part of the election process. The corporate media framed the election as a duel between the mayoral candidates. This meant that COPE received very little air time, either in terms of branding or policies. As a result, COPE candidates suffered at the polling stations, and the people of Vancouver suffered for not having any substantive policy discussions over the past month. Also, running so few candidates made COPE appear marginal, comparable to Neighbourhoods for a Sustainable Vancouver (NSV) and other secondary parties, rather than as a serious contender. This is especially true for first-time voters, who guessed (wrongly) that COPE has a small base.

2. COPE supporters voted for Robertson and Vision, but not vice versa. The results here are clear-cut and shocking. While COPE appeared to pull its historic base of 40,000 voters, it seems that Vision’s base of about 30,000 almost completely ignored COPE. This tragic case of unrequited love allowed Vision to dominate absolutely, trouncing the other parties, and leaving COPE feeling rejected and dumped — at COPE’s election after-party, the sentiment could be heard everywhere: “But I thought Gregor liked us!” Of course, by no means can the blame for COPE’s poor showing be placed enitirely at the doorstep of Vision; but nor should there be any illusions about Vision’s lack of solidarity with COPE.

3. Already Vision pundits are blaming third parties like NSV for COPE’s defeat. The numbers prove beyond a doubt that this is untrue. COPE’s most painful losses were on School Board and Parks Board, where there were no NSV candidates at all. Vision’s electoral machine seems to have completely thrown these COPE school and parks candidates under the bus. There are no third parties to blame here.

4. COPE is not in an unusual situation. Across Canada, and the world, wherever there is a strong centrist Liberal party, truly progressive parties often live in the shadows. In central and eastern Canada, the history of the NDP is the history stubborn commitment in the face of relentless defeat. There, as here, Liberal parties campaign from the left and govern from the right. Only rarely, and after years of building a base, can labour parties expose and break through this liberal sleight-of-hand. Make no mistake, Vision is Vancouver’s Liberal Party run by highly skilled and patently successful political operatives. The sooner Vancouver’s parliamentary left faces the fact that Vision is a top-down Liberal machine aimed at exploiting the left, the better. Better for morale, because we realize there’s nothing exceptional about the situation. And better for justice, because only after making an accurate diagnosis may we make the right prescription, and organize to win.

5. Too many working-class people stayed home. Vancouver is a working-class town, with a median household income of only $35,000 and with a population of over 50% renters — far more than any other city in the Lower Mainland. Meanwhile, the cost-of-living is through-the-roof. With these demographics, and with this inequality, Vancouver should have a downright socialist majority — as do many other similar cities. But it seems that most of these folks did not feel inspired enough to vote. Ellen Woodsworth stated explicitly after hearing the results: “progressives stayed home.”

6. Poor people who were inspired to vote were turned away at the polls. COPE campaign manager Nathan Allan alleged on Sunday that Downtown Eastside residents who had no fixed addressed were questioned by NPA scrutineers and later turned away at the polls. In an interview with David P. Ball from the Vancouver Observer, Allan stated, “Scrutineers on behalf of NPA created enough tension so [city] officials erred on the side of disenfranchising people…[The NPA] frustrated the vote by making the lines long and the process arduous — many people were not able to vote today.” Allan estimated that at least 50 people were turned away from the polls. The NPA denies the claim, and no city officials have been available to confirm the report. In the meantime, COPE is considering making an official complaint.

7. Fear. Vision, like any Liberal party, made everyone fear the NPA. COPE supporters bought this as much as, or more than, anyone else, truly believing Anton and her team to be a mortally dangerous threat. But with no incumbents, and few if any well-known or competent candidates, the NPA was not a serious threat. The fear was over-blown. There’s no need to demonize the other side to win. Campaigns should be fought on the issues, or else we get more of the same: the “same old, same old,” as Jack Layton said.

None of this is to say that this situation would have been assuredly better had COPE refused to form an electoral alliance with Vision. We will never know what would have occurred. A few things are certain: debate would have been more substantive, Vision would have fared poorer, the NPA better, and the rest is speculation. We do know that, in the long run, at some point, COPE will have to find a way to stand on its own once more. This will be difficult given the systemic corruption of developer-council collusion, but the future lies precisely in breaking that deadlock, which is in fact the ‘weakest link’ of corporate power in Vancouver.