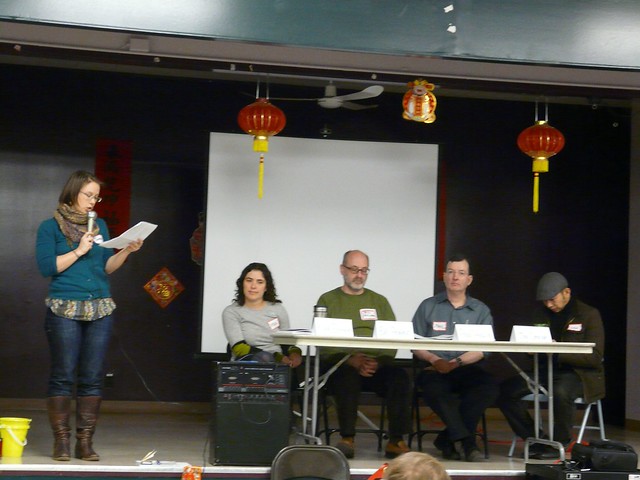 In a report to the Coalition of Progressive Electors (COPE) members this weekend, Canadian Union of Public Employees (CUPE) representative Bill Pegler delivered a strong statement of support for Vancouver’s newly-elected city council. Despite COPE losing all of its council and parks board seats, and all but one school board seat, CUPE has declared the November elections a victory. “For CUPE, the 2011 elections were a success,” Pegler said to a crowd of 100 COPE members gathered at the Hastings Community Centre to debrief the 2011 Vancouver civic election. “The overall goals of CUPE have been met.”

Because COPE accepts few corporate donations, the party relies on unions for the vast majority of its funding. In the 2008 civic election, 80% of COPE’s $350,000 in campaign contributions came from unions, including a full 50% from CUPE locals alone. At the other side of the equation, Vision has identified CUPE as an important piece of the puzzle for electoral success in Vancouver, both in terms of financial donations (CUPE donates more to Vision than to COPE), and in terms of Vision’s ability to secure control over the COPE Executive via its financial donors.

Pegler’s comments send a strong signal to Vision that they should continue the electoral alliance with COPE to keep “the party of renters” in the position of being alive but without seats on council. The comments also signaled to COPE that in order to survive within their current funding structure, COPE volunteers must continue working to elect representatives of CUPE’s preferred party.

While CUPE donates heavily to Vision Vancouver, the majority of Vision’s funding comes from developers. This is due to the fact that city council’s biggest job is to regulate land use — and therefore property values and rents. Under Vision, the city will remain steadfastly right-wing on these core issues, with the result that Vancouverites — including CUPE members — will spend more and more of their incomes on sky-rocketing rents and land values. By considering Vision’s victory a success, CUPE is making the choice to neglect the key issues of affordability, housing security, and public transportation.

Pegler contrasted the electoral success in Vancouver to uncertainty in Toronto, where CUPE has been in the crosshairs since the election of right-wing mayor Rob Ford. The hard anti-union agenda of Rob Ford has caused enormous stress on Toronto’s city workers and their job security. However, the right wing in Vancouver — speaking through the blog City Caucus — has acknowledged that a Rob Ford outcome could never occur in Vancouver. The voting blocks of the GTA (Greater Toronto Area) are fundamentally different from those of the City of Vancouver and are more comparable to Metro Vancouver. Unlike Metro Vancouver, more than half of households in the City of Vancouver are renters, with the vast majority of them identifying as progressive.

The politicization of Toronto’s city hall has caused a stalemate, holding back the neoliberal agenda and prompting popular mobilization. The same cannot be said of Vancouver, where the city’s business elite are more comfortable in the drivers’ seat than in Toronto. If Vision were not constrained by the political power of COPE hanging to its left — which the Vision leadership views as a “sleeping giant” that could campaign on a housing agenda in the future — it is not in fact clear that they would refrain from advancing the same policies being put forward by Toronto’s business elites. This is because on every front other than CUPE contracts and the School Board, Vision has launched a privatization attack on working-class and low-income renters in Vancouver. Whether it is in facilitating the conversion of low-cost housing, selling-off and demolishing its social housing, forcing through rock-bottom corporate taxes or pushing draconian civil liberties violations, Vision has proven their ability to outdo Rob Ford and Vancouver’s NPA, all without the same polarizing effect.

While Vision was formed out of an anti-union split with COPE over the privatized construction of the Canada Line, they have recognized when and where not to pick their battles. For the past two elections, the CUPE-influenced COPE Executive has therefore collaborated with progressives in Vision. The problem is that Vision is guided by the same broad-based philosophy, collaborating with “progressives” to its right. The result is a continuous chain linking up the three parties to form one big ruling class party. After three years of giving support to Rich Coleman, Vision has now appointed BC Liberal and right-wing developer Olga Ilich to chair its housing affordability panel, ensuring that no changes will be made to address the housing crisis.