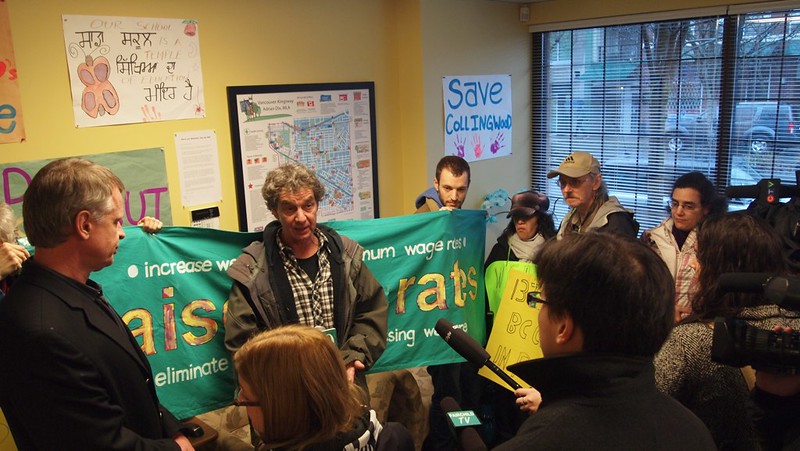 Today marks the one year anniversary of NDP MLA Jagrup Brar’s completion of the “Welfare Challenge.” For the month of January in 2012, Brar lived off the $610, the amount allocated to single welfare recipients in BC. During his challenge, the MLA lost 26 pounds.

Bill Hopwood, one of the event’s organizers,  said: “A year ago today, Jagrup Brar finished his welfare challenge. He couldn’t afford to live on $610. He got in debt, had to borrow money, and lost 26 pounds. Nobody can afford to live on that.”

The activists are calling for some clear commitments from Dix and the NDP.

“They have given a general commitment to bring in a general anti-poverty strategy. No politician ever says they’re going to increase poverty. We want the details, we want them to be specific. Adrian Dix is the leader of the opposition. We’ve done stuff against the current government, but with the upcoming election we’re asking: Is the NDP going to give us a clear choice?”

The activists are calling for Adrian Dix and the NDP to clearly state their support for and commit to increasing welfare rates. As of yet, an increase in welfare rates, or a strategy to fight poverty, are not a part of the NDP’s campaign platform. Raise the Rates is also asking for the NDP to commit to construct housing and increase the minimum wage.

Though welfare rates in Vancouver are $610 per month, the most recent figures show the average rent in the City of Vancouver to be $881 per month. Studies performed by the Carnegie Community Action Project have shown that the number of units under the average, especially those in the Downtown Eastside, have been rapidly decreasing.

British Columbia currently has over 137,000 children living in poverty.