This week the City has released a Report Card evaluating its progress on housing and homelessness. The Report Card gives an A+ to Vision councillors, praised by the Mayor for “exceeding all of the City’s short-term targets.” A brief look at the report confirms that the city is on track to continue the privatization and deregulation of Vancouver’s affordable housing.

Vancouver critics like David Eby have long challenged the practice of police investigating police. The multi-million dollar public relations effort of bodies like BC Housing and the City of Vancouver, however, has not faced the same level of criticism. Like a police force that exonerates itself after an internal investigation, Vision Vancouver is issuing its own “Report Card” in order to escape unscathed from five years of a failed housing and homelessness strategy.

Evaluating housing progress in Vancouver is admittedly a difficult task. The housing crisis is comparable to a whack-a-mole game, where every gain is a loss somewhere else. The recent purchase of the Ramada Hotel, to use just one example, was widely celebrated as a step forward, described by Global BC as a “major purchase in the City’s quest to increase social housing for seniors.” In reality the purchase was a stopgap measure to house the nearly 100 residents displaced by the demolition of the Continental building downtown.

Similarly, the provincial government’s 14 sites of supportive housing — praised in the city Report Card — will be funded by the demolition of 600 people’s homes at Little Mountain, a site that remains demolished, empty and contested five years after demolition. Worse yet, the 14 sites are today years behind schedule. The report prepares the public for another disappointment, revealing that only 84% of 2014 “targets” will be met for the eternally-delayed 14 sites. These new units were promised years before the Olympics. One of the buildings was promised in the early 2000s but stalled, cancelled and recommenced.

By delaying needed housing, the City and provincial government have been able to release dozens of press reports — and now “Report Cards” — on so-called “future housing construction,” without much suspicion from the press. And instead of using the monopoly developers’ empty land banks, the City and Province have decided to build the housing on the site of existing housing. Vision’s pro-market strategy has always worsened this moving terrain of pyrrhic victories and concrete loses.

Other initiatives celebrated in the Report Card include the Rent Bank, the revamped STIR program (“Rental 100”), and the creation of a new Housing Authority. The unaffordable gentrification project by Wall Corporation at 955 East Hastings is also listed as an “action item” on the way towards beating homelessness, but the project has been revealed to be anything but affordable. As with the Sequel 138 project at Main and Hastings, where the city will be renting its social housing at a rate of $900/month, the majority of the 70 “social housing” units in the Wall Corporation’s project will be well out of reach for low-income people, who have continued to mobilize against the project and its hundreds of units of market condos.

Or take the City’s recent decision to lease land to private developers in an effort to build market-rental housing. By listing “equity contribution by partners” as a key evaluation-criteria for determining who will receive building permits, the Report Card confirms The Mainlander’s earlier critique of that initiative. The sites have the potential to create up to 350 units of housing, but by refusing to place a price-limit on the rent rates, and by donating the land to the developer, the City is yet again making the choice to subsidize the private development industry at the expense of affordability. This policy takes its cues from the playbook of neoliberalism, where the developers and banks are bailed-out by the further indebtedness and poverty of ordinary people.

Instead of addressing the real issue, the city chooses merely to move the goalposts and lessen expectations of what is “achievable.” In a revisionist history of their own promises, the report adjusts its goal to End Homeless, stating that a person living in a shelter is in fact not homeless.

The focus is now exclusively on “street homelessness.” In any case, Vancouver’s homeless count has remained significantly the same since Gregor Robertson and Vision took office. From 2010 to 2012 in Vancouver, numbers have been flat-lining: 1,715 were homeless in 2010, 1,581 in 2011 and 1,602 in 2012. The fact that numbers have “stabilized” — to use the City’s terminology — is no cause for celebration, but a clear demonstration that the City of Vancouver is content with the status quo of structural homeless. Shelters have been full all winter, regularly turning away hundreds of people.

Another key aspect of the report is its insistence that the rental condo market is not “market driven.” This is an essential argument for city councillors, who for years have claimed that market condos — if rented out rather than occupied by owners or investors — are by definition affordable. This was the rationale behind the city’s decision to give a $35m tax break to the Aquilinis for their high rise at 800 Griffiths Way, next to Rogers Arena.

Vision’s Report Card takes an optimistic route by creating a revisionist history of its own failure, turning every defeat into a virtue.

Snapshots from the Report Card (which can be downloaded from the City’s website here): 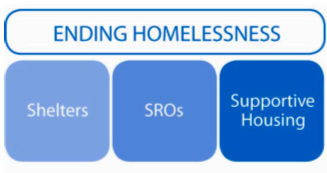 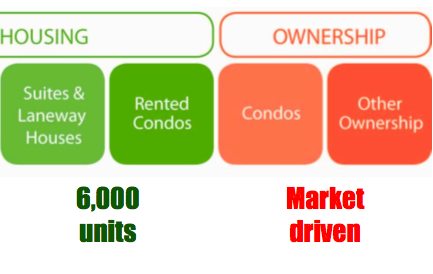