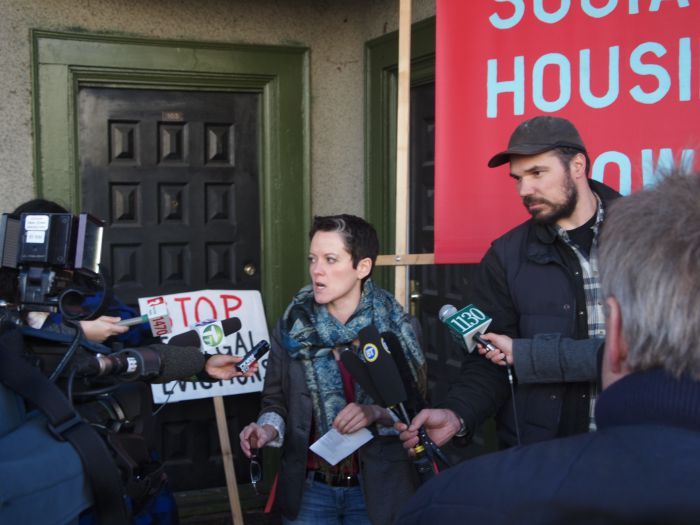 Today Pivot Legal and the Social Housing Alliance and low-income tenants condemned the City of Vancouver for failing to prevent the mass eviction currently underway down the street from City hall, at Cambie and West 7th avenue. “Vision was elected on a promise to end homelessness,” said Herb Varley of the Social Housing Alliance. “Despite this the City turns a blind eye to the continued haemorrhaging of the low-income housing stock.”

The century-old building at 506 W. 7th has provided affordable rental housing for low-income tenants for decades. Rents ranged from $345 to $385 until this past December, when all 18 tenants received eviction notices with the claim that the building was soon to be demolished.

According to lawyer DJ Larkin from Pivot Legal Society, the landlord Peter Robinson does not have any of the necessary demolition permits, nor has he filed for them. “The evictions notices were handed out in bad faith [because] the landlord does not have the necessary permits and as such has not followed the legislation set out by the Residential Tenancy Act,” says Larkin. “The eviction is illegal… and the City should not allow this kind of illegal activity right under their nose.”

Mike Burke, one of the remaining tenants, was asked “what is going to happen to you if this building is torn down? Are you going to end up on the street?” His short answer was, “I suppose so.”

Burke, a six-year resident of the building, moved into the building after health-related issues caused him to leave his work as a crane operator for the construction of the Olympic Village. Despite the fact that one of the city’s homelessness outreach workers have known about the situation at 506 West 7th for many weeks now, tenants say that the City has done nothing to reach out to them. Burke expressed anger at the City: “Many of the tenants who are facing eviction in this building are aged, have disabilities, illness and fixed incomes – and the city is refusing to help us.” 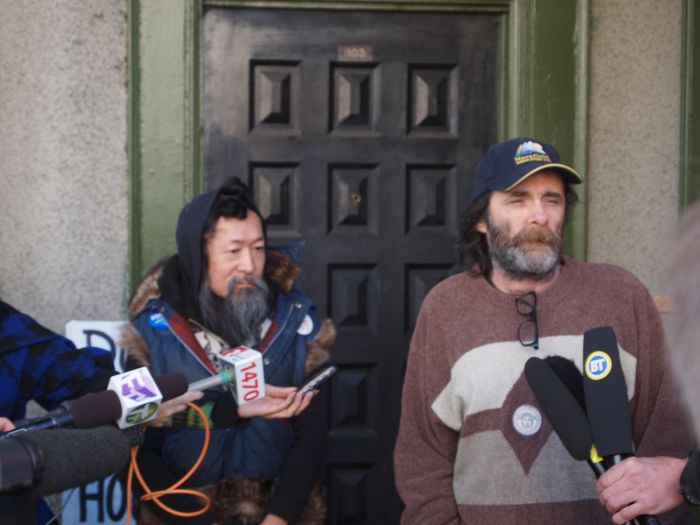 Larkin of PIVOT sees the eviction as symptomatic of the larger housing crisis. “What we are talking about here today is homelessness.” Evictions and demolitions are part of a systemic process that “displace people from stable long-term housing to homelessness,” according to Larkin. “The city has mandated to end homelessness,” Burke added. “It can start here and help us find housing…This city is not affordable for anyone anymore and the existing affordable housing is being torn down.”

In the last five years an average of 900 residential units have been demolished in the City of Vancouver. In 2012, the number of demolitions reached a 10 year high of 1034 residential units. Like 506 W 7th, many homes that get demolished are older and contain multiple affordable rental units. This means that of the 1,000 registered demolitions, the number of yearly displaced tenants due to demolitions is double or triple that number, likely close to 3,000 per year.

Herb Varley of the BC Social Housing Alliance challenged the Vision dominated city council to save the 18 units of rental housing at 506 West 7th by stopping Robinson’s demolition plans. Varley asks: “My question to Vision Vancouver – is there a place for low-income people in Vancouver? for people who don’t own property?” According to many housing activists, the City has the power to regulate permits, for both renovations and demolitions, but is currently doing nothing but blaming the provincial government.

The majority of the remaining tenants 506 West 7th have filed dispute resolutions to the Residential Tenancy Branch, hoping to postpone the eviction and demolition until they can find stable housing. Meanwhile the Social Housing Alliance is calling on City Hall to enforce their moratorium on rental housing conversions, which is supposed to prevent the loss of the existing rental housing stock.