This week the Provincial government and Metro Vancouver mayors said they’re out of ideas on how to expand the transit system. That’s a huge problem because the biggest thing that we can do locally to fight climate change is switch from private cars to public transit.

The best way to cause that shift is to put a transit pass in everyone’s hand, and make it affordable. But recent moves toward fare increases and fare gates mean that we’re actually increasing emissions.

TransLink estimates that switching from car to transit will reduce a person’s CO2 emissions over four-fold (from 224 grams of greenhouse gases per km travelled to only 50 grams). Indeed the reduction may be even more significant. Although 16% of commuters take public transit, they contribute only about 1% of vehicular emissions (0.07 out of the 5.5 million tonnes).

Season 1, Episode 13
Victoria vs. Vancouver: Poverty, Gentrification and the War on Drugs

An updated Little Mountain Policy is coming to Vancouver City Council today, June 27 2012. The most notable issue is that the developer, Holborn, is now openly challenging the cornerstone of the project: that the proceeds of the land sale should fund the 224 ‘replacement’ social housing units onsite.

In 2007, the City and the Province agreed that ‘replacement’ social units — to house the 600 people dislocated by the Little Mountain demolition — would be funded from the sale of the land to a developer. The language in the agreement was unambiguous: “Whether the Site is rezoned or not, BC Housing will replace the existing 224 units of social housing on site … BC Housing will invest all of the net proceeds from the sale of the Site (after the existing social housing is replaced on site) into the development of social housing throughout the province. Half the net proceeds (after the existing social housing is replaced) will be invested in the City of Vancouver.” (For an analysis of the offsite housing, please see the article Myth of the 14 Sites by Nathan Crompton).

After signing this clear agreement, the Province then chose Holborn Properties Ltd. as the project’s developer. These two parties entered into a separate agreement involving sale of the land to Holborn. However, the terms of the agreement, including the dollar value of the land sale, have been kept from the public.

Although the latest proposal and its ideas remain in draft form, the document contains a couple of substantial policy proposals, including a municipal Housing Authority and a Land Bank. These are two very good ideas, but the question remains: will the proposals actually be implemented? If so, will it be at a scale capable of meeting the demand for real affordable housing? Will it be done in a way that benefits residents and communities instead of private developers?

The Housing Authority proposal is a good idea, but not a new idea. For example, the City of Vancouver Public Housing Corporation has existed since the 1980s. But it has been so inactive that it owns only a dozen buildings, most of them in the Downtown Eastside. For this reason, The Mainlander has been consistently arguing in favour of a reactivated and robust Housing Authority. During the 2011 civic election campaign, Vision and the NPA did not endorse a Housing Authority. COPE was the only party to do so.

It is surely a step in the right direction to start talking about what a reactivated Housing Authority will look like. The trick is to make it powerful enough to make a real difference. For that to happen, the devil is in the details. And today’s interim report is weak on details. It floats the idea of a hypothetical “City-owned entity, such as a Housing Authority, [which] could enable the City to deliver on its objectives for social and affordable rental housing.” 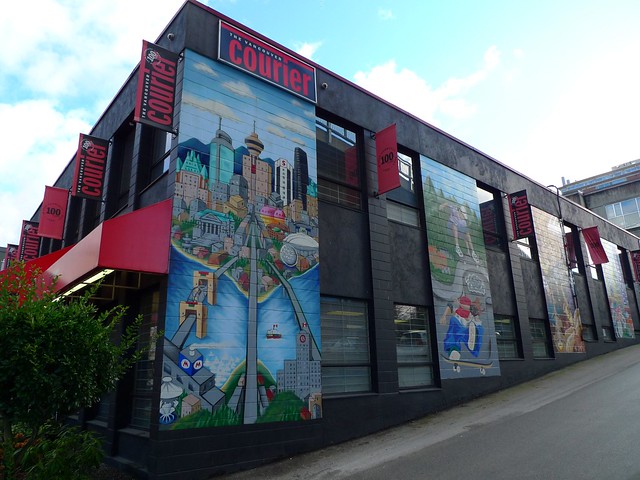 Two weeks in a row, Allen Garr has written articles attacking Downtown Eastside community members who oppose the Pantages condo project slated for their neighbourhood. Harold Lavender, a board member of the Downtown Eastside Neighbourhood Council (DNC), has called Garr’s recent writings “libelous and horrible articles” filled with “scurrilous attacks.” One would imagine that before publishing something so inflammatory, the veteran columnist would make sure he was on solid ground. Let us examine whether Garr did any investigating, or whether his words are indeed “scurrilous.”

Garr’s article opens with thunder: “By all accounts, it looked like a riot. There was pushing and shoving, cops and security guards trying to control the crowd and death threats being uttered: ‘There will be blood in the streets.'” Is that an accurate representation of what happened? I was there and wrote an article about the same meeting. How could two accounts of the same event be so different?

First, of course, Garr wasn’t there. What I learned, by speaking to staff of city hall and City Manager Penny Ballem, was that the Mayor’s Office determined beforehand to block DTES residents from the public hearing. When residents demanded to be allowed to enter the hearing — which is why they sent a delegation all the way to city hall! — security, police and city managers responded completely out of proportion to anything reasonable. In front of everyone’s eyes the police physically assaulted three members of the public, all who simply stated verbally that the meeting should be publicly open. It is impossible to imagine what would happen if City Hall treated a delegation from Shaughnessy in the same way.

This past Monday, April 23rd, all three voting members of the Vancouver Development Permit Board (DPB) voted in favor of the ‘Sequel 138’ condo project on Hastings, next to the Carnegie Centre and across from Insite.

The decision to push through the gentrification project was made beforehand by senior city staff at the direction of the Mayor’s Office. Nevertheless, the city went through the motions of holding a DPB meeting to listen to community concerns. The meeting lasted 7 hours, from 3pm to 10pm, with about 50 community members giving speeches. Almost all delegations passionately opposed the project.

After seven hours of delegations, not one member of the DP Board or its Advisory Panel engaged in discussion or posed any further questions of staff for clarification. The Board moved immediately into a vote. First, the nine members of the Advisory Panel gave their advice. The only member of the nine-member Advisory Panel not personally associated with the development industry, Duncan Wlodarczak of SFU’s Sustainability Centre, spoke for deferring the decision until “rate of change” mechanisms are in place to address the balance between market and non-market development in the DTES, as outlined in the DTES Housing Plan. One other member Advisory Panel member, Jasminka Miletic-Prelovac, spoke in favor of deferral until the Downtown Eastside Local Area Plan (LAP) is in place next year.