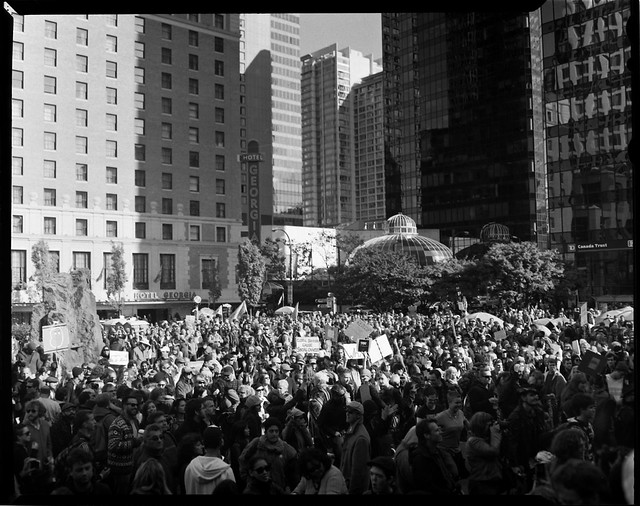 A massive, global social movement has erupted weeks before a municipal election. Its goal is to bring light to the injustice and unsustainability of a corrupt capitalist system. In Vancouver, hundreds have taken the North grounds of the Vancouver Art Gallery, with a general message that change is needed now. But, the mayoral debate has orbited around the issue without touching it. Like the Czar on the eve of the 1917 revolution, the two most electable candidates are fighting over who is better at getting rid of the protest rather than who will better address inequality. The ballot question they want is: whose autocracy will better calm the masses. It’s almost as if they don’t understand the issue, and the polls are showing that most people are unhappy with both of them.

What has happened to make Vision sink in the polls? It’s not an NPA surge, that’s for certain.

HOUSING. The failure to address our housing crisis. In the 2008 election, Vision Vancouver won on progressive values, promising to end homelessness and implement an empty condo tax. But now, without the tax, condo prices are at historical highs, and homelessness is higher than it was three years ago (despite public relations spin to the contrary). Social housing has been sold out at the Olympic Village, and three years on the Village still has hundreds of empty units.

CORRUPTION. The corruption of developer-council collusion is only growing. The two major parties are accepting over $4 million in donations this year, much of it from developers. In the absence of a ward system, councilors answer only to the big money players and aren’t accountable to particular neighbourhoods, whether it is spot-rezonings or wholesale giveaways to developers in the form of blanket height changes.

PARTY POLITICS. The agreement with COPE has meant that instead of competing with progressives for a more equal and just City, Vision must compete with the NPA in a contest to see who can make it more unequal. Perhaps rightly thinking that they will receive the progressive votes by default, Vision challenges the NPA on the right-wing front, guaranteeing three more years of politics for the 1%.

NEO-LIBERAL POLICY. In lieu of the progressive promises of 2008, Vision is now embracing conservative ideas:

Many occupiers have wondered about the city’s Street & Traffic By-Law 71.1, posted on city signs throughout the Art Gallery grounds. The purpose of this article is to give information and analysis about the By-law and its impact on #occupyvancouver.

“NO CAMPING: No structures (tents or other shelters) permitted in this area or on any other city street, sidewalk or boulevard. Street & Traffic By-Law 2849 Sec. 71.1.” While these words read like eternal declarations, seemingly handed down to us from the founding laws of our colonial state, the reality is that they are recent history — very recent. This past April, Vancouver’s city council and Mayor Robertson passed amendments to Section 71 and other sections of the Street & Traffic By-Law that seriously restrict protest in public space.

The April meetings of city council were called for legal reasons. In October 2010 the By-Law had been ruled unconstitutional by the BC Courts, who gave the city six months to change it. On April 7th 2011, council presented its new edits to the public. According to the new version of the By-Law, political structures remained illegal except with a special permit, which could be purchased at a cost of $200 plus a refundable deposit of $1000. The Mainlander pointed out that under the new By-Law, “no structures would be allowed before 8am or after 8pm, eliminating the possibility for extended protests.” The amendments were unanimously rejected by the public, including the the BC Civil Liberties Association, Pivot Legal Society and the Vancouver Public Space Network.

City council was forced to re-work its amendments, and returned on April 18th to present its revised version at a “no debate” meeting. Despite unanimous public opposition yet again, the Vision-led City Council passed the motion. The allowable structure size was reduced, with the addition of new penalties for non-compliance with the law: anyone who does not follow the new rules faces immediate removal and a minimum fine of $1000. The changes were passed and are now being fought again in the courts. The current version of the By-Law is worse than the edits of April 7. The law is less constitutional than before and today the BC Civil Liberties denounces its “bizarre, unnecessary and arbitrary restrictions on political expression [that] violate free speech; full stop.”

As protests in solidarity with #OccupyWallStreet spread across the continent, the “99%’ers” here are beginning to think about what #OccupyVancouver might look like. This is a good thing. Left-wing movements have always known that since capitalism itself is global, resistance to it ought to be global.

For New Yorkers, the most obvious and logical target is Wall Street. Staging a protest camp adjacent Wall Street in downtown New York city is no small feat. New York police are highly militaristic in quashing protests. One can only imagine the intensity of police desire, under pressure from New York power-brokers, to disperse the camp. The bravery of the activists is one of the things from which to draw inspiration.

What does it mean, then, to hold a protest in solidarity with that in New York? In part, it means to be inspired by their courage. That means to take spaces that challenge the real seats of power in our local situation. That may mean taking the steps of the Vancouver Art Gallery, but probably not: the reason protests are often held there is that the space is relatively easy to book. An #OccupyVancouver truly inspired by the original would take a space that is non-bookable, that directly challenges power-brokers.

Throughout Canada, there are many appropriate targets: Bay Street in Toronto, the headquarters of tar sands-related energy corporations in Calgary, and so on. In Vancouver, Coast Salish territories, there are many things to consider. Most importantly, the violence of colonization is felt acutely here, where European settlement began more recently than most other regions of the continent. (Indeed, the word “occupy” is often associated with European colonization of the land; it’s possible that the term, with its multiple meanings, may confuse or distract some from the spirit of #OccupyWallStreet: to stage a collective protest that challenges the 1% who run the capitalist economy).

Arguably the dominant function of Vancouver’s economy is that its housing market acts as a ‘sink’ for global capital accumulation. Investors, most of whom are locally-based, store their extracted wealth in Vancouver’s inflated real-estate market. The inflation of housing prices is managed by a realty oligopoly. This has created an affordability crisis for the working-class. While property-owners rely on the development monopoly to keep their home prices inflated, renters, who constitute the majority, are exploited. The city which most resembles Vancouver in these respects is Hong Kong. Vancouver and Hong Kong rank together as the most unaffordable cities in the world, with the median house price costing more than three times the median household income. As a result, residents are being driven out of their homes, onto the streets, out of the city. In Hong Kong, they have clearly identified the seat of power, and began their own #Occupy-like movement earlier this year. The story may serve as yet more inspiration for those thinking about our own solidarity movement.

Toppling property hegemony: “Down, down with the property tycoons!”

Just this past March 26 2011, Hong Kong activists staged a protest in one of [developer] Li Ka-Shing’s supermarkets “because property developers, not the government, were the ‘real enemies of society'” [1]. As an act of creative civil disobedience, protesters filled shopping carts with items, then stood in line without buying anything, to “paralyse property hegemony for an hour.” One protester said: “We chose ParknShop because it is owned by Mr. Li Ka-shing and we all know Mr. Li is the real boss of Hong Kong…We are not expecting this to change the world, or beat down Mr. Li or the property-developer hegemony. But we want to make it a start of a new satyagraha campaign. We used to protest against the government. But it is no use. We target developers because they are the boss of the government and the real enemy of the society.” Another protester, a recent university graduate, said: “Even if we want to rent a flat, the rents are beyond our reach. It is because the influence of developers is too big.” [1]

Readers may know that Li Ka-Shing’s Concord Pacific bought Vancouver’s massive Expo Lands in 1988, developed Yaletown, and still has long-term plans for 10,000 to 20,000 more high-end condos on North False Creek. Concord Pacific, now run by Terry Hui, remains a major player in Vancouver’s developer oligopoly, with most new housing inventory planned beyond 2013 in Vancouver under its control. Concord’s ‘land bank’ comprises a large portion of Vancouver’s undeveloped lands, including much of False Creek, as well as 58 West Hastings – the site of 2010’s Olympic Tent Village. Concord exerts its power over Vancouver housing prices by developing its ‘land bank’ very slowly as high-end condos. These and similar undeveloped properties and empty condos controlled by Vancouver’s monopolist developers (such as the Aquilini Group, Wall Financial Corp., Concert Properties, Holborn Properties, and marketing ‘coordinator’ Bob Rennie) are reasonable targets for #Occupy. So too is the mostly empty Olympic Village.