A mass “renoviction” is underway at the York Rooms hotel on the Downtown Eastside. The York is a Single Room Occupancy (SRO) hotel at 259 Powell in the Oppenheimer District, with 34 rooms of low-income affordable housing. Here at the York, the connection between retail gentrification and residential displacement is made clear. Long-term tenants living directly above the building’s new Cuchillo restaurant faced the threat of eviction immediately after the restaurant opened its doors.

Over the last two months at least seven residents of the York have lost their housing through eviction or by being paid to leave. Housing advocates have knocked on doors in the building and estimate that half of the rooms in the hotel are now empty, an estimate recently corroborated by current tenants. A spokesperson for the landlord confirmed on Thursday that 14 of 34 rooms are empty, a vacancy rate of just over 40%.  The average vacancy rate in the rest of the DTES is 1%.

A Tumblr site at http://thenewyorkrooms.tumblr.com/ touts the newly-upscaled empty units, advertised as “micro apartments” or “artistic SROs” despite their actual condition as 112 square foot rooms, with no kitchen, no sink, and shared bathrooms. In a city where the affordable housing stock is rapidly diminishing, these SRO units are essential housing for Vancouver residents whose income is limited to a monthly income assistance cheque of $610. But with rents going from $415 to $525 or more after an eviction, that’s over a hundred dollars a month that Vancouver’s poorest cannot afford.

“They’re trying to kick us all out. I haven’t done anything wrong, but I feel like they’ll be gunning for me,” says Sherman Vanderbos, resident of the York Rooms. “I don’t know where I am going to go. I’m scared I’m going to be sleeping in the park next month,” he added. Another resident said he expected to be removed soon, and was hoping he would be paid to leave rather than evicted. “They’re paying people 800 to 1,600 bucks to leave quietly,” he said. “I’m looking forward to leaving because I need the money.”

What does a restaurant have to do with it?

The York Rooms building was purchased by real estate developer Steven Lippman in 2011. Lippman has a record of aggressive evictions and upscaling which have exacerbated the Downtown Eastside’s homelessness crisis, as the Mainlander previously reported. Despite thorough documentation by the Carnegie Community Action Project of the displacement that these renovictions have caused, city councillors such as Kerry Jang have singled out these projects for praise while denying that any displacement is taking place. With these clear signals from City Hall that nothing will be done to protect low-income residents from real estate speculators, Lippman continues his project of rapid gentrification.

At the York, the agenda of “revitalization” operates by pushing out long-term low income tenants with intimidation and harassment. Once the building is emptied of low-income residents, it can then be renovated to allow for huge rent increases. Cheap leases are provided to high-end restaurants to make the surrounding land and buildings more attractive for investment and to attract a wealthier clientele.

The landlord and restaurateurs feed off each other, criminalizing and evicting low-income tenants to create a zone of exclusion so that wealthy clientele feel safe to drink and dine. Additional nearby amenities, like high-end restaurants, coffee shops, and vintage clothing stores draw in younger, “creative class” renters to accelerate gentrification across the neighbourhood. 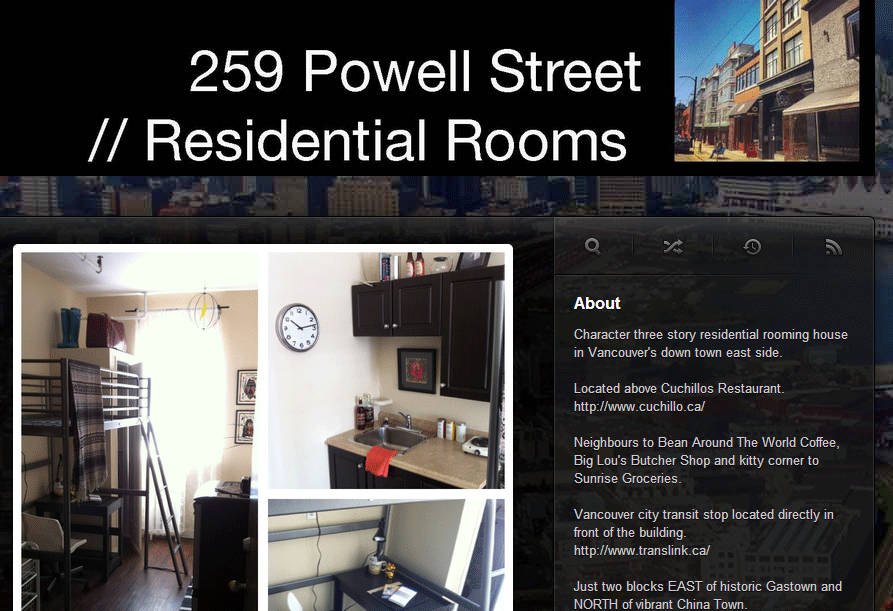 Retail gentrification in the Oppenheimer district has rapidly accelerated in the last year, and the 200 block of Powell is a new focus. Today the block remains mostly residential, containing low-income affordable, supportive, and co-operative housing. On all sides of the high-end Cuchillo restaurant sit affordable rental that the low-income residents of Vancouver depend on. But this available housing is vanishing quickly. The City of Vancouver acknowledges in their latest Social Impact Assessment that over 2000 units of welfare-rate housing have been lost to rent increases over the last 5 years. Like the residents who were pushed out in the area surrounding the Woodward’s project, the residents of the York have no place to go. Once affordable housing is lost, it is lost for good.

In the run-up to Cuchillo’s opening, new resident managers were installed at the York Rooms. They came armed with with a militant eviction agenda. Since the opening of Cuchillo, tenants claim they can no longer access floors other than their own, making it increasingly hard for them to visit remaining neighbours and friends on the other floors of the building, or discuss their mistreatment and organize. Tenants are harassed for using the bathrooms, communicating with other rooms, or even for leaving their door open in the middle of a hot day. Security and surveillance have escalated, and tenants have even reported being followed by the managers after they leave the building, so that managers can see who they are associating with.

One tenant reports that she now has a camera pointing squarely at her door, severely compromising her right to privacy. Others claim the new manager wears a camera around his neck and records all his interactions with tenants to use as evidence for future evictions. The intercom and buzzer are regularly disabled to restrict tenants’ rights to visitors, with the illegal requirement of a tenant escort at all times imposed on any visitors that do try to come in. One tenant who has lived for seven years at the York Room says, “This is my home. But after what they’ve done to it, it’s worse than jail in there now.” She was evicted last week.

When asked where he would go if he got evicted, Chuck, another York Rooms resident said, “I don’t have anyplace to go here in Vancouver. I supposed I’d have to try to get to Ontario.” A similar question was asked in a community survey to 655 DTES residents in 2008. Residents were asked that if they lost their welfare rate SRO housing, where they expected to end up. The top answer was “on the street” or “homeless” or “in a shelter”. “Don’t know” was the second most frequent at 35. Others included “Burnaby,” “Surrey,” “New Westminster,” “up North,” “family,” “jail,” “suicide,” etc. The answers show that if people lose their DTES homes, they will try to find homes where they can, in other neighbourhoods, towns and cities. Many don’t seem to think finding a new affordable home is possible and believe they will end up on the streets, in jail or dead. (http://ccapvancouver.files.wordpress.com/2008/07/ccapvisionwebsm.pdf)

Wendy Pedersen, one of the organizers of the pickets at the Cuchillo restaurant below the York Hotel, said “I wonder if people realize the historical significance of this. People dependent on disability, OAS or other income supplements are being replaced by the working poor in this neighbourhood. And once it’s done, it can’t be undone; we will just have to deal with the fallout. There’s no place for people to go who have only $375 a month for rent to spend. 5000 rooms need to be replaced with social housing and the city’s draft plan for the area doesn’t account for this need.”

At a press conference outside the York on Thursday August 22nd, 2013, Pivot Legal Society lawyer DJ Larkin and housing advocates called on the City to protect low-income residents from eviction. These evictions are occurring at the same time as the City is asking Downtown Eastside residents and organizations to sign onto their proposed “Local Area Plan” for development in the community over the next 8 years. Pivot alleges that Lippman’s pattern of evicting residents on income assistance constitutes a human rights violation under the BC Human Rights Code, which protects against discrimination on the basis of “legal source of income.” They also claim that the lack of definitions in both the SRA bylaw and the DTES Community Plan are allowing landlords to evade policies intended to protect low-income residents.

“Respectfully, the City of Vancouver must commit to a definition of social housing that is clear and which protects low-income residents on income assistance and disability income,” said J Stewart, Manager of Community Engagement with the Union Gospel Mission. “Without that we fear this plan may be predicated upon ambiguity substantial enough that makes it unlikely to succeed, or insufficient enough to protect vulnerable people living in welfare rate housing.”

“The City of Vancouver needs to step in and investigate the human rights violations that are happening at the York,” said Pivot lawyer DJ Larkin. “New affordable housing for students and artists must not be developed on the backs of people most at risk of becoming homeless and most in need of real low-income housing options.”