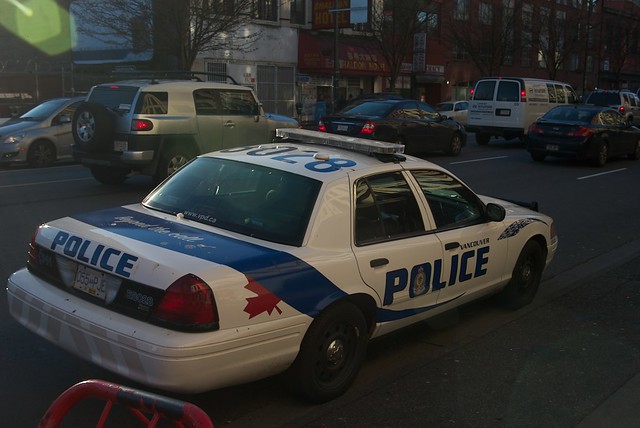 This past Thursday, the Vancouver Police Department published a press release about a series of arrests made in the Downtown Eastside. It describes eight suspected drug traffickers who used violence, torture, and fear to cruelly control residents involved in the drug trade. Some of the conditions the victims of these criminals had been put through include being stabbed, beaten, and held in cages. As the press release states, this is the first case of Criminal Organization charges being laid in Vancouver police history.

It took community protests to pressure police to investigate exploitation of Downtown Eastside residents. The two police initiatives leading to the arrests were part of an umbrella program called “Sister Watch,” which was designed to curb violence against women in the Downtown Eastside in response to grassroots protest.

Although it would be an improvement for the police to begin protecting residents from exploitation, it must be said that the strong-arm approach of both the VPD is a significant part of the problem of violence in the Downtown Eastside. The “war on drugs” diverts resources away from social services into policing. It simply has not been the case that police use these resources to protect residents from exploitation. On the contrary, the police impose added violence onto the poor, who are unfairly shuffled through the revolving door of “justice.”

Aggressive policing leads to police misconduct. The past year has provided several examples. Notably, a woman was pushed down by a group of beat officers walking assertively down Hastings Street, an incident that wouldn’t have received so much coverage had it not been caught on video.

A revealing publication on the practices of the police was released in 2002 by the Pivot Legal Society. Fifty residents were interviewed by Pivot lawyers and asked about their interactions with the police. Thirty-six claimed to have been victims of excessive force. Twelve had been victims of police violence that according to the report could be classified as torture under the United Nations definition.

A lack of accountability has been a huge problem for the VPD and other police forces for decades. The policy of having police investigate themselves upon allegations of police misconduct has also stirred some significant criticism. The lawyer of an innocent man who was mistakenly beaten by police recently called the police investigation conducted for his client “a farce.” After a nine month investigation, Delta police found that Vancouver police had been acting in line with proper procedures. They argued that when the police tried to arrest him, he unlawfully resisted. He had not been charged with anything.

The criminalization of the poor turns victims into criminals, who are then afraid to call the police to report violence. If drug users are seen under the law as criminals, it’s understandable why 95% of violent crimes go unreported. The Sister Watch program has itself aroused some controversy, as some residents are not comfortable accepting help from the police. Furthermore, a tough-on-crime approach can only stop violence that has already happened. Setting up complicated arrests doesn’t stop acts of violence and exploitation until far too late.

Alternatives to this style of policing are urgently needed. A conference was held last month in Vancouver about the failure of the War on Drugs and the successes of programs that pursue harm reduction (see this good report in Megaphone). Harm reduction is a policy of creating a safe environment for drug users and proving medication and other treatment services to help curb addiction. Advocates of harm reduction argue for the decriminalization drug use and for creating safe consumption sites. The only two sites in North America are in Vancouver, and have so far been very successful, despite the ongoing controversy surrounding them. In 2009, four hundred and eighty four overdose interventions took place at Insite, with no fatalities. Located above Insite is a detox centre, where drug users can begin the difficult journey out of addiction.

But harm reduction is not enough to stop the horrific violence of the drug-trade and the War on Drugs. It is time to start thinking about full legalization of drugs. Criminalization of drugs creates a black market where both drug cartels and police exploit marginalized residents in their own ways. Furthermore, millions of dollars are drained out of the community into the banks of drug cartels, while millions more are drained from City coffers into reactive and repressive policing.

Back to the Four Pillars

Vancouver’s Drug Strategy has for some time been made up of four pillars, prevention, harm reduction, treatment, and enforcement.

Harm reduction has been very successful. The conference held in December was a chance for Vancouver to share some of its success with the world. Treatment and prevention address the root causes of drug-trade violence.

The progressive discussion about ending violence seems to have been lost on local police. Vancouver City Council has also shown support for a strategy that over-emphasizes enforcement. In its operating budget for the upcoming year, Council further increased the VPD’s budget in spite of a decrease in crime and claims from the chief of police that the force didn’t need any more officers. Council will vote this Tuesday on another $11 million to the police as part of its capital budget. This is money that could be going to treatment programs.

For the police to regain the confidence of citizens, serious changes need to be made. Drugs need to be fully legalized. The police budget needs to be frozen (at the very least), and citizens need to be prioritized. They also need to have access to safe and affordable housing. Vancouver’s homeless population is its most vulnerable when it comes to the violence of the drug trade.