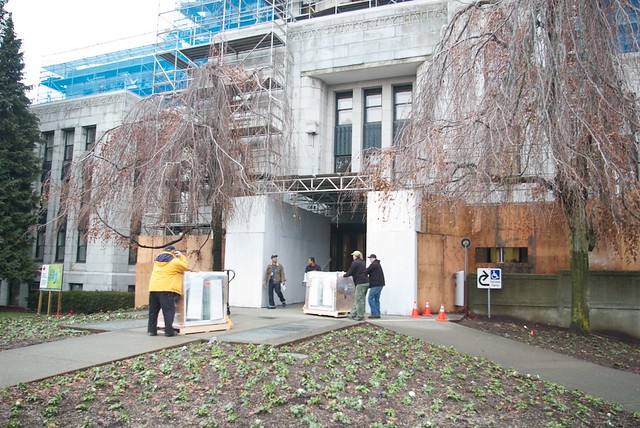 Later today at City Hall there will be a discussion and vote on “Vancouver Views,” a policy that would see increased heights Downtown, especially in the West End.

The Vancouver Views policy has attracted quite a bit of controversy. The policy will mean serious changes to the urban environment downtown, and some have begun directly criticizing planning staff and making accusations of misleading the public with their reports. They argue that not only have the public not had enough consultation or time to absorb what the changes will mean, but also that Council could not have had enough time to “do their homework” around the policy.

The Vancouver Views policy is only one part of a ‘divide and conquer’ strategy surrounding planning within the city. This past month has seen several attempts at blanket rezonings of areas dominated by renters. There has been a serious community based, grassroots resistance to wide-sweeping changes that would increase opportunities for real-estate developers. Community organizations argue that the social effects of these policies require more discussion and consideration. Council passed an emergency motion to hold off public consultations on a similar policy, the Historical Area Height Review, last week. Dozens of speakers had signed up to speak not only against the policy but also against City Council itself.

Also at Council will be the discussion and vote on its capital budget. The capital budget includes the construction of infrastructure, City-owned building renovations and public works projects. The staff administrative report is 117 pages, and includes everything from summaries of revenue from Developmental Cost Levies to the wide variety of proposed projects for 2011.

In spite of the huge support shown throughout the city for affordable housing, the city plans to spend only $22 million of the $337 million budget on new land, construction and renovations for affordable housing. This is not enough. Instead, the report shows a continuance of Vision’s pro-police policies. On top of an unnecessary increase in the police budget of $5.7 million approved in last month’s operating budget, the Vancouver Police Department will receive an additional $11 million to relocate to a new central station. A significant amount is also being spent on Vision’s “Greenest City” initiative. Particular spending for greener public works is difficult to decode; there are no cost comparisons provided but in general this will mean retrofitting existing city infrastructure to pass higher environmental standards. The city plans to spend another $16 million on information technology projects for city hall.

If City Council truly wants to act on the wishes of its citizens, more must be spent on ensuring all classes of people can afford to live in Vancouver. The police and upgrades to city hall should not be prioritized over housing affordability.

Vision Vancouver has announced it will hold open nominations for all its elected positions, except the mayor. Members of council and the park and school boards will be up for grabs in the next few months.

Vision party members will decided whether or not Gregor Robertson stays as mayoral candidate in the 2011 election by referendum. The party is calling the vote a “leadership review.” Vision members will decide a question either ‘yes’ or ‘no’ with a simple majority deciding. NPA Councillor Suzanne Anton said of the review that, “they don’t want to talk about his flaws.” COPE Councillor Elen Woodsworth called Robertson the “trademark” of Vision Vancouver.

Gregor has repeatedly come under fire, especially recently, about his failings on his campaign promises, especially surrounding his promise to end homelessness by 2015.