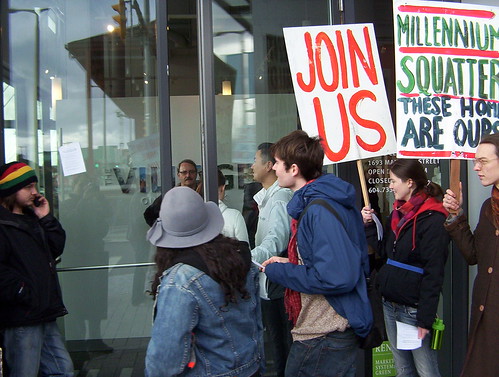 This past Saturday, Housing activists established a picket line in front of the Olympic Village condo sales centre, where the City is trying to sell off the housing units promised as social and affordable housing. Picketers engaged with prospective buyers and asked them to “respect the housing legacy picket line” and refrain from purchasing broken-promise housing units until Olympic housing promises are secured and until questions are answered about the Millennium bail-out.

Picketers attempted to enter the sales centre to purchase the remaining units with a larger-than-life $400M cheque from the Property Endowment Fund. The City responded by restricting access to the sales centre. Only those with pre-arranged meetings with realtors were allowed in.

Here are three interactions that stand out:

1 | One woman, who came to the centre to get out of a contract she had signed 7-days previous (it was therefore her last day to do so), was at first barred from entry. Only after 30 minutes of protest did security allow her inside to get out of the condo contract.

2 | A prospective buyer was barred entry because of the clothes that he was wearing (on cell phone pictured above left). Security was given discretion to allow entry based on apparent class.

3 | A family that had planned on buying a broken-promise unit changed their mind after hearing from the picketers. The family emerged from the sales centre and declared that it was immoral for them or anyone else to buy housing that had been promised to those who need it most (video below).