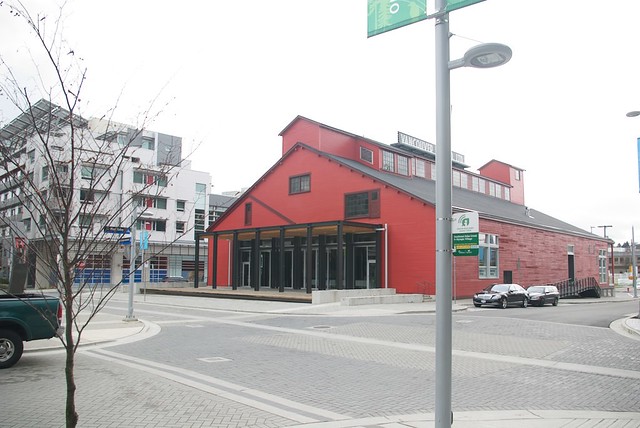 Over two hundred people packed themselves into the still-empty Salt building at the Olympic Village on Sunday afternoon. They were there to hear from the City and developers, and to have their say about the 26 story luxury tower planned for Broadway between Main Street and Kingsgway. Most of those who attended were property owners in the area, with a few renters in the mix. Several business owners, renters, and concerned citizens from outside of the neighbourhood were also present.

The sentiments expressed in the room were almost unanimously against the project. Most of the discussion seemed to focus on the height of the building. The development is twice the allowable density for the neighbourhood at an FSR (floor to space ratio) of 6.44, compared to the current zoning FSR of 1 and the allowable FSR of 3 for the neighbourhood. Concerns about the height are focused on several issues in particular. A tall building will set a precedent for the allowable height and density in the neighbourhood in the future. Many attendees claimed they didn’t want a “Yaletown-sized tower” in their neighbourhood, and that this tall building in particular will block sunlight from hitting the well-used streets to the North and East of the development.

Another serious problem with the consultation was the social representation at the meeting. Mount Pleasant, in addition to being a working class neighbourhood, houses many immigrant families. A 2008 report by the PIVOT Legal Society was very explicit about the problems faced by immigrant families who rent in Mount Pleasant. It notes the difficulties that many families have with the intimidating prospect of organizing against gentrification. It also highlighted the phenomenon where, in wituations where home ownership opportunities do arise in the neighbourhood, the families who already live there cannot afford them, and they are taken up by usually young white families from wealthier Vancouver neighbourhoods. The presentation by RIZE on what the finished development will look like confirmed that this is the demographic the project is marketed towards.

After a presentation by the developer, the community was asked to assume that all 26 stories of the tower would be built and discuss the Community Benefits that should come out of the construction of the tower. In cases of rezoning, developers are supposed to contribute a portion of their profit from the rezoning (since rezoning drastically increases the value of the land) with the community. In this case, the developer had proposed having a fraction of the units in the development be STIR market rental units, while also including 9,200 square feet of artist use space as their contribution. In 2009, when the previous buildings that stood on the land burned down (an investigation into which was called for by one attendee), the building contained affordable artist use spaces.

Several community members pointed out that market rental (rent from similar units in the neighbourhood sits at around $1600 per month) and artists spaces wouldn’t necessarily benefit the existing community, and would likely further gentrify the neighbourhood. Affordable housing, supportive housing, art gallery space, a public square in the centre of the project, office space for non-profit organizations, as well as several other alternatives, were proposed by the community instead.

A follow up meeting will be held on April 12th, from 4pm to 9pm at the Heritage Hall on Main Street.. Those concerned are encouraged to contact the City and Council. The city’s page for the develpment is available here.