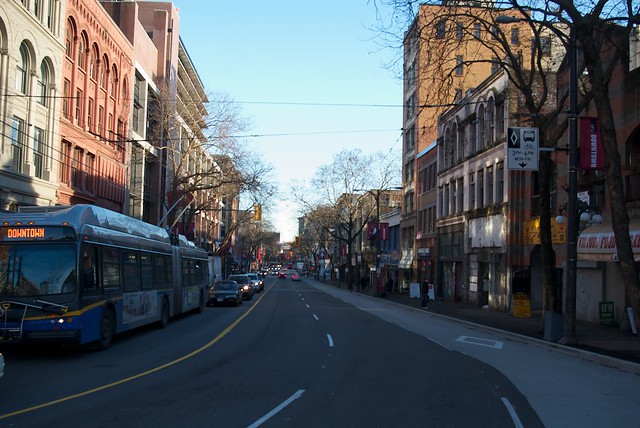 Grassroots activism has won social housing above the new library, soon to be built on the 700-block of East Hastings. The development will now include 20 units of family social housing for single mothers and children. The City of Vancouver’s March 22 media release and press conference announcing the new housing made no mention of the tireless activism, but the truth is that the proposal would have died months ago without the work of community activists. The City preferred not to build the housing, and had to be pushed every step of the way to make it a reality.

Last week, activists held a celebration of the victory (article here). “One of the most important things is for us to celebrate our victories,” said Beth Malena at yesterday’s Downtown Eastside Neighbourhood Council (DNC) general meeting. Malena told a crowd of 100 DNC members that the housing victory wouldn’t have happened without them. “The City gave zero credit to you all. They probably don’t want to remember that they needed to be pressed to do something that was such a no-brainer.”

Indeed, City Council had to be dragged into the process, practically kicking and screaming. In the summer of 2010, DNC members Fraser Stewart, Rene Belanger, and others collected 1,500 signatures for a petition supporting social housing above the proposed library. The petition was presented to the Library Board and City Council, and the latter passed a motion to “explore the possibility” of housing on the library. But by Oct 7 2010, City staff asked Council to vote against social housing on the library.

It was clear to activists that very little effort had been made by the City to “explore the possibility” (see this letter to Council). Over 50 housing supporters came to the Oct 7 Council meeting to make their case. See here for the video.

The City already owned the land, but Councilors claimed that there was no money to build the housing above. Infamously, Gregor Robertson claimed “there is no money in the drawers” (this was only months after deep cuts to business taxes). Furthermore, Councilor Geoff Meggs argued passionately that it was so urgent to begin building the library that we could not wait even a few more months to secure funding for social housing. As a last resort, housing advocate Wendy Pederson of the Carnegie Community Action Project asked that, at the very least, the material foundations of the library be built such that they could support possible housing in the future. Council voted to proceed with a stand-alone library, with the caveat that the City manager could have an extra month or two to secure funding for housing.

DNC member Dave Murray told the Vancouver Media Coop that after the meeting “we were so let down, they voted 9-1 against us. I remember walking away very depressed thinking that was that.” But people did not give up. On Oct 21st, a demonstration was held outside the proposed library site, where kids and their parents demanded both books and housing. The next day, activists confronted the Mayor and Councilors at a $500/plate fundraiser lunch with the business elite, demanding that real action be taken to build housing on the library.

In November, the DNC asked supporters to call Mayor Robertson and Councilor Kerry Jang (the City’s point-person for housing and homelessness) to ask them to build housing on the library. Many housing advocates phoned these publicly-available numbers (see campaign flyer here). Shockingly, Jang responded by literally swearing at people and sending police to the homes those who phoned his publicly-available number. Needless to say, contacting elected representatives through public channels is a foundation of any democracy, and it was profoundly anti-democratic for Jang to send police to intimidate citizens.

Despite City Council’s vacillation, defensiveness, and manic repression, housing activists re-doubled their efforts and not only continued to demand that housing be built on the library, but added 9 more locations to the list of sites they wanted the City to secure for social housing. And thus was born the DNC’s 10 sites campaign. The library site was the first of the 10 sites identified, and so this month’s victory sets the stage for 9 more victories.

There are many reasons to give credit to the activists who made this victory possible, and to register it for posterity. First, when political parties take credit for grassroots initiatives, it is not only insulting and classist, but it obscures the process by which change is produced. Political parties are not structured to drive positive change: they are reactive and by nature co-opt the work of others. Change must come from the grassroots.

Second, grassroots struggle is particularly effective when it is sustained. In activism, there are few easy victories. Only by applying pressure over an extended period of time were housing activists successful in pushing the City to do the “impossible.” It is not uncommon for supporters of the status quo to disparage a given protest as “ineffective,” but this point of view is simply a kind of tunnel vision that views each protest in isolation, outside of the larger campaign or struggle.

Activist “burnout” may be lessened if expectations for quick payback are set aside in favour of relentless, patient, and determined long-term strategic action. And when victories are achieved, it is worth celebrating! Especially those victories previously dismissed as unrealistic and impossible.