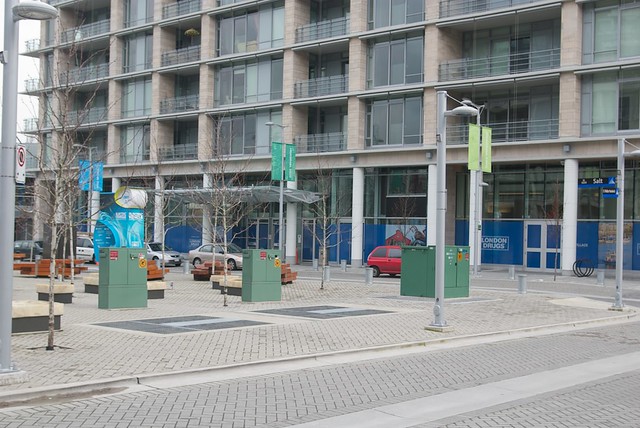 The City of Vancouver announced Friday that it has seized numerous assets owned by the Olympic Village developer, Millennium Development, including 32 properties worth $50M and other assets valued at around $10M.

The City is owed $575M by Millennium for the Olympic Village construction loan. But City staff said Friday that after seizing Millennium assets, they now anticipate recouping a total of $725M. This means that the City plans to make $150M profit even after the construction loan is paid off.

The original 2005 Official Development Plan for the Olympic Village called for 2/3rds of the housing to be “affordable” (over 733 units out of 1100), half of which would be social housing (366 units). To that end, the City negotiated that Millennium would pay the City another $200M for using the City-owned land on Southeast False Creek. About $30M of those land-profits were already paid to the City, and in April 2010 the City invested approximately that amount ($32M) into the remaining non-market housing, although the number of these had been drastically reduced. But now that the City anticipates accumulating another $100M – $150M profits, there are no plans to invest them into meeting housing promises at the Olympic Village, or anywhere else in the City.

For now, the corporate media is parroting the nonsensical line that the City will “lose” $40M – $50M on the project (see CBC and TheSun), but it would be much more accurate to say this: whereas the City originally hoped for $200M in profits from the land lease, to be used for meeting Olympic Housing Legacy, now Gregor Robertson plans to make around $150M profit, but not re-invest it.

One reason for this is that he has placed full faith in condo marketers to set his social policy. Bob Rennie has advised the Mayor that for the Olympic Village to be a success, it must be exclusive and elitist.

The City is also doing everything it can to bail out and reduce hardship on the developer by entering “voluntary” receivership and minimizing and delaying asset seizure. All this is to maintain strong ties with the development community. As noted in The Mainlander on Feb 26:

The Millennium development corporation is not bankrupt or insolvent, as many suppose. On the contrary, they remain legally on hook for the construction loan. For now the City has taken control of marketing the Olympic Village properties, but Millennium has many other properties and assets. Instead of going after Millennium’s assets, the City has bailed-out Millennium. Millennium had been paying high interests rates, but the City has waived that requirement. The City is selling off social housing to keep Millennium afloat.

Furthermore, the City is actively working to gentrify the Downtown Eastside, and doesn’t want people to realize that there are millions in profits flowing from the Olympic Village broken promises. At the same time, Robertson is claiming that there is “no money in the drawers” to protect the low-income community.

And so the ‘scandal’ of the Olympic Village thickens: the City broke its housing promises, then bailed-out Millennium, now plans on making over $100M profit from the development, but refuses to reinvest this into meeting Olympic housing promises. Meanwhile, five homeless shelters are slated to be shut down this month, kicking people onto the streets while the ‘broken promise’ units on False Creek sit empty.