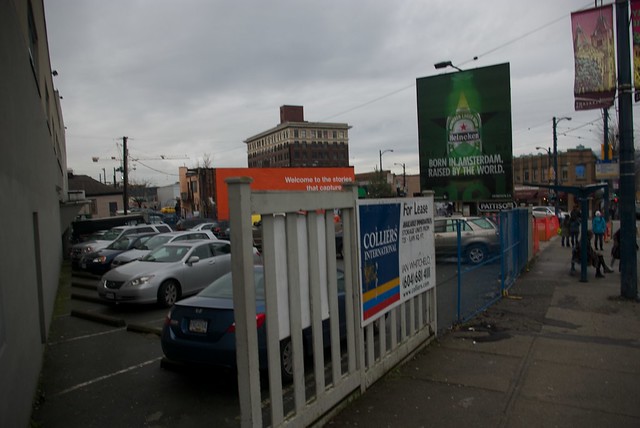 The results from the March 20th hearing were displayed last night at a City-hosted open house. The Heritage Hall on Main Street was full of concerned citizens giving feedback on the modifications that City staff have since made to the Rize Development’s rezoning application. Most of the changes had to do with the height and scale of the building. What had been a 26 story tower has been downsized to 19 floors. The massing has been decreased on Watson and 10th Avenue, but increased on the side facing Broadway. A huge majority of residents said that a building between 6 and 12 stories would be more appropriate for the location – the smallest option on the City’s feedback forms. The drop in height reduced the density from 6.44 FSR (Floor to Space ratio) to 5.33 FSR. This is still significantly higher than the standard 3 FSR for the neighbourhood. Another new development containing social housing was talked down at City Hall from 11 stories to only 8 last July.

The massing and form are now set to be similar to those of the Lee Building on the North-West corner of Broadway and Main. The developers have been trying to spin this new tower as becoming the “signature” building for Mount Pleasant, but most see the historic Lee Building as already filling that role.

While the City has lowered the building by a few floors, as proposed it is still almost twice as tall as anything else around the Main and Broadway hub. To meet the concerns of the community, the development will still have to change significantly. The City will also need to find a way to address the neighbourhood’s affordability concerns. As it stands the development would still be very detrimental to the socio-economic makeup of Mount Pleasant.

Most of the residents were also against the Community Amenities and Benefits that had originally proposed. People are concerned that even the STIR (Short Term Incentives for Rental) housing would not be affordable to people who currently live in Mount Pleasant. STIR units rent at market rates. Mount Pleasant has traditionally been an affordable, working class neighbourhood, and STIR rent in a luxury tower would likely be much higher than most in the neighbourhood could afford. In combination with the market rental, some community art space and public art have also been proposed to compensate the community for the developer’s gains from rezoning. Many were concerned that the proposed artist space would be too expensive for artists, and that artists are finding it increasingly difficult to afford to live in the neighbourhood.

At the open house, there was an opportunity for residents to express further concerns. The sense in the room was that 19 stories is still much too high. Height is being framed as the major issue for this development, but there are also serious concerns about who will be able to afford living in Mount Pleasant. Residents are worried that this development will have a domino effect, leading to further large luxury condos being built in the neighbourhood.

The council meeting for this development has not yet been announced. More information is available on the City’s website for the rezoning here.