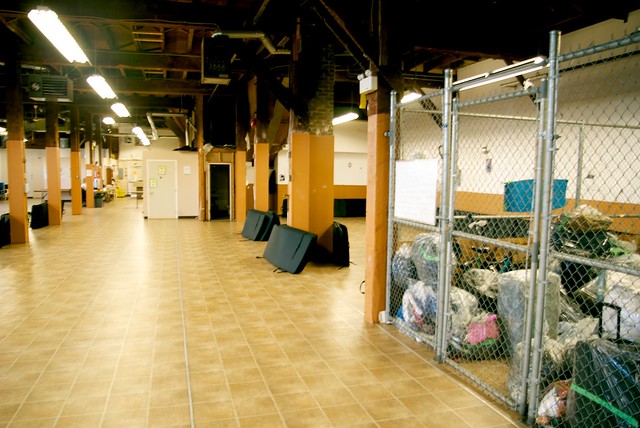 Five homeless shelters are scheduled for closure in Vancouver this week because the provincial government refuses to regularize funding. Each of the 5 shelters has a capacity of 40 people.

One of the five shelters, at Fir and 4th, was already shut down last Wednesday. About half of those kicked onto the street were seniors, according to Gail Harmer of the Council of Senior Citizens of BC (COSCO). Some of the seniors were offered SRO units in the Downtown Eastside, but all refused because of the deplorable conditions of the SRO units.

Three of the shelters, run by RainCity, are set to be shut down this week. One of these, the Cardero St. shelter in the West End, is set for closure this Wednesday, April 27th, despite support from many local organizations – even the Downtown Vancouver Business Improvement Association (DVBIA). There had been a noticeable reduction in street homelessness in the West End, but since the Cardero St. shelter stopped accepting new residents at the start of April, more people are living on West End streets.

A coalition of organizations is scheduled to hold a press conference at the Cardero St. shelter tomorrow demanding that all the shelters be kept open until appropriate housing is secured for the shelter residents (see media release below).

The New Fountain shelter is operated by the Portland Hotel Society (PHS), which has run a campaign for the past month to save this one shelter. PHS has not coordinated their campaign with the other shelters, residents, or advocates. Last week, New Fountain staff told The Mainlander that they were operating “as if funding is going to continue,” suggesting that PHS has already struck a deal with the City and Province. The “Support New Fountain shelter” Facebook page is administered by Sarah Blyth, who is currently a Vision Vancouver Parks Board Commissioner. It appears, then, that PHS and Vision Vancouver have worked with Minister Coleman to save the New Fountain shelter at the expense of the other four shelters. This is a big mistake, because every shelter resident has an equal right to dignity and shelter.

The coalition to save the five shelters is demanding that shelter funding be regularized, so that shelter residents are not subjected to yearly evictions. For the past few years, the City and the Province have been playing games with the lives of the homeless. Last spring, five shelters were also closed. In the fall of 2010, when a cold-snap hit Vancouver, governments were unprepared to re-open emergency shelters. It took months for the shelters closed to be reopened.

Vancouver – On Tuesday morning, homeless residents of the Cardero Street Shelter, with the help of housing advocates, will demand that Premier Clark keep her promise to “regularize shelter funding” and keep 5 Vancouver shelters open until homelessness in Vancouver has ended.

Five emergency shelters, with approximately 200 shelter residents, are scheduled to close because of lack of funding and commitment from the city and province.

Shelter residents and advocates will announce a coordinated response to these shelters closures should Premier Clark and Mayor Robertson fail to renew funding immediately.