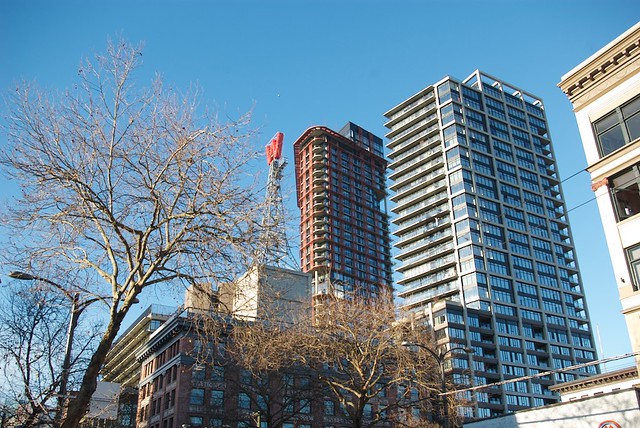 Over the past two years, Vancouver City Council and its Planning Department have been increasing height allowances throughout the City. Almost every neighbourhood faces or has faced either a wide sweeping height plan or a precedent setting rezoning application: the DTES, the West End, Mt. Pleasant, Norquay, the CBD, and now Cambie St. This surge in upzonings is a key causal factor of Vancouver’s plummeting affordability.

In their current form, increases in height allowances essentially constitute deregulation of the real-estate market. By removing limits placed by either community-led groups or the planning department, developers can build whatever they think will be most profitable on a piece of land. In Vancouver, this means maximizing views, which means maximizing height. It also means luxury condos. If this process continues, the City’s affordability will continue to worsen.

Increasing height and density allowances on a piece of land drastically increases its value. Whether through a neighbourhood-wide ‘blanket rezoning’, or through a single plot ‘spot rezoning’, increases in density equate to windfall profits for real-estate developers. Even without any new construction, upzoning a parcel of land plays a huge role in how it is valued. This is why developers buy up properties and then “donate” to political parties like Vision Vancouver, with the expectation that their properties will be upzoned. This can lead to spiraling speculation throughout an area. There is a lot of money to be made from these rezonings.

There has been sustained pressure from developers to increase heights. This pressure came to the fore during the recent DTES Historic Area Height Review, when former City Planning Director Ray Spaxman described the influence that big real-estate can have on the planning process.

Upzoning also means that it’s more expensive for the federal, provincial and municipal governments to build much needed social and affordable housing.

Resident groups have been fighting zoning increases for a number of additional reasons. Changes in zoning lead to drastic changes in neighbourhoods, and many feel that they’re being left out of the rezoning process. Even Mount Pleasant, whose community plan was completed last year, is being threatened with a nineteen story tower on the corner of two of its arteries. This is despite the fact that height and character are recurring themes in the Community Plan. Real-estate developers will be watching how this application progresses, and it’s very likely that the potential for development will increase on other prominent corners in the neighbourhood. Developments act as precedents for future developments.

Many citizens believe that manageable increases in density can be achieved under current zonings. COPE Councillor Ellen Woodsworth, on January 18th of this year, put forward a motion to City staff to prepare an inventory of the density and population increase that could be accommodated under the current zoning.The report has yet to come back, despite a thirty day time limit being placed on her request.

The vogue argument in favour of upzoning are is that it creates a “density” that is sustainable: dense communities where people work, shop and live mean less driving, which is better for the environment. But for a community to be truly sustainable, there needs to be social and economic as well as environmental sustainability. When low- and middle-income people who work in Vancouver can no longer afford to live here, there is nothing sustainable about, not least because commute distances increase as wage workers are shipped in and out of the city. Today there are pressures on rapid transit across Metro Vancouver precisely because many who cannot afford to live in Vancouver must commute.

To accommodate increases in population, Vancouver does need more housing. But it’s important to pay close attention to what type of housing is being built.  The luxury housing that is currently being built can’t be rented out. Almost zero affordable housing is being built. If anything, existing rental units are being converted into condominiums. Instead of real-estate deregulation, what we need is the opposite: intervention into the market to create affordability.

A citizen organized public forum is being held on Tuesday, May 24th to discuss the issue of spot rezonings. It is being organized by ARRCA, the Arbutus Ridge Concerned Citizens Association, and a panel discussion will take place at the Hellenic Community Centre (map here) at 7:00pm.