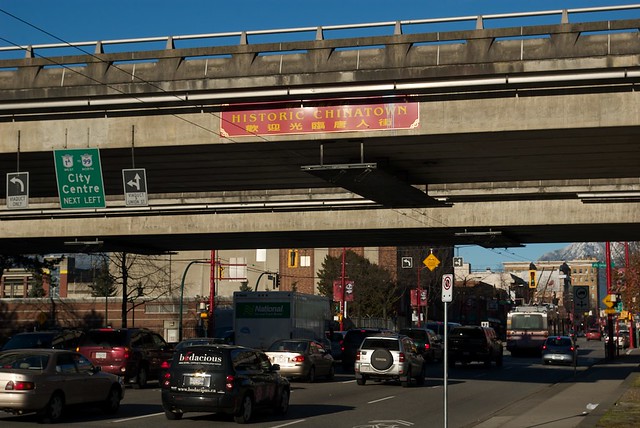 Mayor Robertson and his party won power on the backs of the poor, claiming to represent their aspirations and promising to “End Homelessness.” Today, Vision Vancouver is waging war on the Downtown Eastside, the last refuge for Vancouver’s low-income residents.

One might wonder at the use of a military analogy – “waging war” – but sadly Robertson’s party has employed ruthless political tactics to outmaneuver Vancouver’s most marginalized residents who, despite negligible resources, are nonetheless fighting back stronger than ever.

As we have reported previously, Vision Vancouver is moving to implement the NPA’s gentrification plan for the Downtown Eastside (deceptively called the “Historic Area Height Review”). The plan, which goes to Council for a vote this Thurs, Jan 20, calls for seven 15-storey condo towers in the Downtown Eastside. It is certain that these developments would impact surrounding property values. Low-income residents, as well as the stores, services, and amenities they use, would be displaced at a pace even greater than what is already underway, with the social and economic goal of gentrifying a low-income community by importing a new class of residents (which City Planning staff like to call “body heat“).

To distract the broader public from their undemocratic plan to gentrify the Downtown Eastside, the Vision-led City Council will be voting on a separate “view-corridors” proposal for towers in the central business district at the same Jan 20th meeting as the DTES plan. The City has purposefully attempted to link these very different plans in the public’s mind, with some success. The supposed link between them is the abstract notion of “height.” The two plans both deal with building heights, but will inevitably have more significant impacts on density and social demographics. Focusing on height instead of density changes the debate. This article from Sunday’s Province, for example, is stuck in the City’s frame about “height,” ignoring any question of social impact, and referring only fleetingly to the Downtown Eastside at the end of the article.

It can be said that what primarily connects the plans is, ironically, that in both cases the City is attempting to divert attention from social impacts!

It must also be emphasized that the two plans have very different goals and impacts. The “view-corridor” plan aims to put in place a few tall buildings to “frame” aesthetically-pleasing mountain views from the central business district. Negative impacts of the plan include the blockage of some private and public views, but it seems like the true purpose of the plan is to reframe the general debate as though it were about everything other than actual people. As long-time activist Rider Cooey said in a recent video interview with The Province, “views in particular are a discussion designed to deflect discussion of serious issues like housing, social justice, and poverty.”

The City’s strategy of lumping the plans together reached offensive levels at an “information session” hosted by the City this past Monday. The stated purpose of the information session was to clear-up “misinformation” about both plans. This approach was clearly condescending to all concerned residents. Downtown Eastside opposition to the condo plan is certainly not based on “misinformation.” In fact, residents seem to be more informed than Vision Councilors themselves! In talking to The Mainlander on Jan 14, Vision Councilor Geoff Meggs referred the “Historic Area Height Review” incorrectly as the “Chinatown Height Review,” and suggested that the new condo developments were all South of Pender, which they are not. Two of the most controversial sites are North of Pender, including the half-block BC Electric site across from Pigeon Park.

Instead of holding two information sessions (one in each of the affected communities), a single session was held in the Crystal Ballroom of the Empire Landmark Hotel in the West End. This could be read in two ways: first, Robertson and company are more concerned about West End voters than Downtown Eastside ones. Secondly, they knew that an information session in the Downtown Eastside would reveal overwhelming and informed opposition to the gentrification plan, and would focus the debate on key social issues (which the City prefers to ignore). Nevertheless, some Eastsiders made the trek to the “Crystal Balloom,” only to feel alienated by the affluent surroundings, and to have their unique issues dismissed by Planning staff.

The information session was dominated by Director of Planning Brent Toderian, while Councilors of all parties watched from the audience. Toderian did not address residents’ concerns about the social impacts of the condo tower plan. Instead, he threatened that the condo towers could have been higher (not by any stretch a sound argument in favour of the plan). Then he simply stated that staff and Council had listened to the concerns of the low-income community, but decided it was not necessary to address them – yet. The City will conduct an after-the-fact social impact study to measure the displacement caused by reckless condo development.

When it was mentioned that rezoning for higher density should be part and parcel of a holistic community plan that includes social, environmental, and economic factors, especially in a vulnerable community like the Downtown Eastside, Toderian responded with another threat. He said that the Planning Department is already thinking about a broader community plan for the area (which they are calling the “DTES Strategy”), and suggested that staff will push for removal of the 20% social housing requirement in the Downtown Eastside-Oppenheimer Distric (DEOD) subarea.

Toderian’s sole justification for proceeding with the condo plan was that the City needed to put the breaks on speculation. Before the Height Review, there was “so much speculation, so much land was changing hands,” he said. But the reality is that by relaxing height and density allowances after the speculation spree, Toderian and staff are rewarding the speculators – basically putting free cash in their pockets. If he truly desired to thwart speculation, the proper course would be to announce that there will be no free height increases, and to impose inclusionary zoning on the whole of the Downtown Eastside – not to mention on the rest of the city.

There is near, if not total, unanimous opposition to the condo plan by the low-income residents of the Downtown Eastside, who represent 70% of the community. The Downtown Eastside Neighbouhood Council passed a strong motion against the condo plan on Jan 8 2011. On Jan 13, a community resolution signed by a variety of groups was sent to City Council. Yesterday, Jan 17, a press conference was held at one of the proposed condo tower sites, where Aboriginal, Chinese, and low-income residents voiced their opposition to the condo plan, alongside small-businesses and artist collectives (see articles: VMC, The Province, Vancouver Sun).

To neutralize this opposition, Robertson’s party has taken to the old divide and conquer strategy. The condo plan (Historic Area Height Review) has, since its inception by the NPA in 2007, been about all of the Downtown Eastside West of Main. There are towers proposed for the North side of Pender, as well as on Hastings Street. The City officially acknowledges that Chinatown is part of the Downtown Eastside, so the City should also recognize that condo towers in one subarea impact adjacent blocks. Instead, Vision Councilors are now pretending that the condo plan is only about Chinatown. Further, they claim that the plan’s legitimacy stems from support from Chinatown alone, thereby pitting the “Chinese community” against the “low-income” community. But of course this is a false distinction, as there are thousands of low-income Chinese seniors who have not been consulted, and who will be displaced along with everyone else.

The City claims to have consulted the Chinatown leadership, and to have, after a “heated” dialogue, finally secured its buy-in. What the City doesn’t tell you is that the traditional Chinatown leadership only accepted the 15-storey towers “compromise” after being threatened with the prospect of 30- to 40-storey towers – by right-wing BIAs and some of Vision’s developer friends (e.g. article here).

The “Heights” of Deception

Mayor Robertson has, of course, been noticeably absent from the abovementioned forums, and prefers to send his Councilors into battle. And when the mud starts sticking to them, the Councilors send in City Planners to the front lines. But there should be no mistake about it: Vision Vancouver as a whole is attempting to gentrify Vancouver’s Downtown Eastside, and is eager to polarize the neighbourhood and confuse the broader public to do so. Vision Vancouver as a whole must be held responsible for ascending to such “heights” of deception.