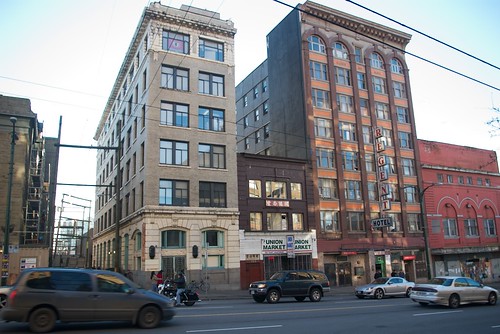 Real estate developers were noticeably upset when, on Jan 20, residents of Vancouver’s Downtown Eastside scored a partial but significant victory against the City’s undemocratic condo-tower plan. Instead, the City was forced to finally allow a (potentially) resident-driven planning process for the area.

Shocked by their defeat, it took developers and their friends in the corporate media over one week to respond to the democratic turn of events. Finally, on January 27, the Vancouver Sun editorial board published their talking points in an editorial titled Giving a lift to the Downtown Eastside: Build taller buildings. The piece is so counter-factual, misleading, and bigoted that it is worth unpacking line-by-line.

The Sun then notes that there are “300 to 1,000 souls” who are homeless in the Downtown Eastside, but offers no solutions at all, nor any response to residents’ valid concern that gentrification will compromise the remaining low-income housing stock, pushing more people onto the street.

Instead of advocating a sophisticated approach to problem-solving in the Downtown Eastside, the Sun insults and stereotypes groups trying to address problems: “[The DTES] serves as the raison d’etre of swarms of social agencies, NGOs and self-proclaimed anti-poverty activists…Some activists have a vested interest in preserving the status quo. A gloomy ghetto of misery, destitution and squalor keeps them in business.”

Firstly, it is not acceptable to use language (“swarms of…”) which insinuates that community organizations are like insects. Nor is it ethical to suggest that it is a bad thing for people to form organizations to help each other out, to work for social justice, and to make their neighbourhoods better places.

Far from being kept in business by “misery, destitution and squalor,” grassroots organizations are the only ones working against these evils. They are the only ones advocating for safer, more appropriate housing for those in need; for a living wage; for a community plan that empowers residents and builds upon community strengths while overcoming challenges. In contrast, the Sun editorial board’s priority is gentrification, which would push more people onto the streets and into the shelters, thereby worsening the “misery, destitution and squalor” of actual people’s lives.

It should be noted that there are many different kinds of organizations in the Downtown Eastside: some are large agencies that receive significant government funding (such as the Portland Hotel Society) and others are grassroots resident-based organizations operating on shoe-string budgets (such as the Downtown Eastside Neighbourhood Council). While many large agencies, including PHS, supported the condo plan in the hope of securing increased funding, it was almost exclusively resident-based organizations that organized against the condo plan. Their motivations were not self-interested, but on the contrary stemmed from a genuine and noble democratic desire that residents control the destiny of their own neighbourhood, that they be treated with dignity and respect, and that that they not be displaced with nowhere to go.

Far from being against change, grassroots organizations in the Downtown Eastside have been self-mobilizing to create an inclusive framework for community development. As Jean Swanson said in her response to the Sun’s editorial:

To assume that “activists” want to “preserve the status quo” is to be ignorant of two years of work done by the Carnegie Community Action Project with 1,200 people: A Community Vision for Change that was developed by the low-income community.

But the Vancouver Sun has no respect for grassroots organizations. When the editorial refers to “the self-proclaimed anti-poverty activists, including REED (Resist Exploitation, Embrace Dignity) and the Vancouver Area Network of Drug Users,” it is clear that the Sun believes that merely the mentioning the names of the organizations discredits them. However, these are innovative and empowering groups whose work is helping communities across BC.

The Sun bemoans the fact that many dozen’s of “academics have joined forces with these groups to block the development of market housing in the area.” It should be said that part of the reason the Sun is careful to stigmatize Downtown Eastside organizations is to shame these professors and other potential allies of the Downtown Eastside. Elites are always particularly savage in their criticism of “traitors to their class” – those who use their privilege, especially academic privilege, to join forces with those with less privilege. (See the response of some of these academics here: Gentrification pushes out the poor).

Blind to the strengths and needs of the existing community, the Sun somehow concludes that Woodward’s is the model for development: “the only possible way to view the Downtown Eastside as vital or viable is to see it from Simon Fraser University’s tony new [Goldcorp] School for Contemporary Arts.” Judging from recent protests, it is doubtful that many residents would support the neighbourhood re-branding: “the Goldcorp Downtown Eastside!”

By explicitly stating that there is no value, nothing “vital or viable,” in the existing community, the Vancouver Sun dehumanizes residents. Such dehumanization justifies structural violence and social cleansing through gentrification.

Ghetto: what’s in a name?

It is important to tackle head-on the Sun’s problematic language. The editorial refers to the Downtown Eastside as a “ghetto.” This term specifically derives from the forced segregation of Jews in European cities and, more recently, has in the United States been applied in complicated ways to African-American neighbourhoods, whose segregation and poverty are the result of centuries of legislated discrimination. It is crucial to understand how and why the Sun employs this word.

It is true that many Downtown Eastside residents are victims of stigmatization, and are excluded from other parts of the city through an endless number of prejudices, policies, and exclusionary practices. However, there is little evidence that the Sun is sensitive to these injustices, and so we must assume that in this case the term “ghetto” is not meant to call to mind such discrimination. The Sun’s editorial is anything but a clarion call to end poor-bashing. Unfortunately, when the Sun describes a neighbourhood as a “gloomy ghetto of misery, destitution and squalor,” the goal is to perpetuate fear and disgust. The name “ghetto” is meant to stigmatize the neighbourhood, to literally condemn it: to justify demolition of the community – in much the same way as the term “urban blight” was used by City planners in the 1950s and 60s to stigmatize Strathcona in order to bulldoze it.

The tactic of referring to the Downtown Eastside as a “ghetto” is spreading throughout the corporate and right-wing media. Another op-ed piece (also arguing that the condo plan should be resuscitated), appeared in the Province under two alternate titles: “Downtown Eastside shouldn’t be a ghetto for the poor” and “The Downtown Eastside must be destroyed.” The article calls the neighbourhood a “hellhole” and concludes that “the more residents who are pushed out, the better.” It could not be more clear that “ghetto” is used to dehumanize the neighbourhood in order to justify displacement.

In a 24hours op-ed piece, Mike Klassen of the NPA-linked blog City Caucus also used the term “ghetto” while simultaneously pretending to distance himself from it. The DTES, he said, is “a place many refer to as a ghetto.”

In its finale, the Sun extols the main virtue of the condo plan: that city staff carefully considered whether the condos would block people’s views of the mountains! The Sun writes: “Council should listen to the advice from city staff, which has made great efforts in its height review to, among other things, preserve view corridors in determining where taller structures should be built. It is a valuable guide.” Again, the impact on human beings is studiously ignored.

The Sun then implores City council to undemocratically steam-roller over the wishes of residents: “Council must stiffen its backbone and clear the way for construction, even in the face of opposition.” It is unimaginable that the Sun would approve such a disrespectful approach to residents of any other neighbourhood or community.

It is necessary to state publicly that poor-bashing, or any form of bigotry, is unacceptable in our society, and that the Vancouver Sun’s editorial board should apologize or else resign.